Nobody would ever accuse desis of being quiet folk. You get a few desis together and pretty soon the volume of the chit chat rises; you get them excited and all the white people in the room start giving them dirty looks. We are voluble people. 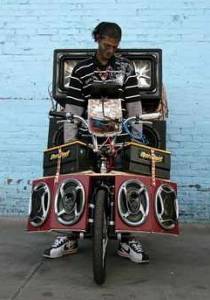 So it’s not surprising that young desi bikers in Queens are making their presence known. Out where I live, white men on motocycles remove their mufflers and rev their engines, the aural equivalent of pissing on a tree. In Richmond Hill, young Indo-Carribeans mark their territory more euphoniously using huge speakers … on their bicycles, a tradition brought over from Guyana and Trinidad.

That’s right, this desi biker “gang” is real old school, eschewing newfangled innovations like the internal combustion engine for the purity of gears and sweat.

A new biker gang is roaming the streets of Richmond Hill, Queens. This crew of mostly teenagers can be seen riding along 103rd Avenue just west of the Van Wyck Expressway. The bikes roar… these contraptions look and sound more like rolling D.J. booths.

“This one puts out 5,000 watts and cost about $4,000,” said Nick Ragbir, 18, tinkering with his two-wheeled sound system, with its powerful amplifier, two 15-inch bass woofers and four midrange speakers. It plays music from his iPod and is powered by car batteries mounted on a sturdy motocross bike. [Link]

When I started reading the article and noticed all the names were desi, I was hoping for families of four on scooters or mopeds, women riding side saddle, but bicycles are almost as good.

Let other teenagers cruise around in low riding automobiles with the trunk and backseat full of woofers, burning dinosaur juice, bringing us Indian summer year ’round. We’re rolling rickshaw style, moving our bodies to propel the music up and down the streets, dancing in the saddle as we pedal and peddle.

Who needs an iPod when you live in a desi neighborhood?

Slideshow with pictures here. The other photos are even better.