Relax, this post has nothing to do with Bobby Jindal. Banish the thought and just bear with me for a moment. Last week, after one of the candidates I was eyeing as the potential recipient of my vote made a monumental policy blunder (which made me question everything about this candidate), I started giving a closer look to another candidate who had more sensible and educated things to say on the same issue. And that is when I decided that it was finally time (after months of my teenage-like infatuation where I contemplated the perfect post that might get her to take notice of me) to write about an awesome potential development that would take place IF Hillary Clinton goes on to win the White House. I’m talking about that goddess beautiful and capable assistant of hers, Huma Abedin. Huma currently serves as Clinton’s “body man,” similar to the character of Charlie on the show The West Wing. If she doesn’t go on to become the Chief of Staff, she would certainly remain one of Clinton’s closest advisors, with daily access to the Oval Office. From an article I first read in April: 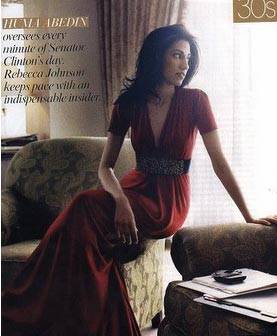 Last June, under an oppressive sun, at a rally to save the Niagara military base at the University of Buffalo, all of New York’s top politicians–George Pataki, Chuck Schumer, Hillary Clinton–poured sweat.

Yet there was exactly one member of the wilting delegation who managed, somehow, to stay cool: Hillary Clinton’s mysterious, glamorous and eerily unflappable aide de camp, Huma Abedin.

“It was like 110 degrees outside,” recalled the source, a political aide who asked to remain anonymous. “We were all just pouring down with sweat. But I have this distinct memory of Huma traipsing in in this blue pantsuit–it was like this wool pantsuit–not a bead of sweat on her brow, not a hair out of place, with everything perfectly organized in her Yves Saint Laurent handbag.”

That sort of fantastical, supernaturally tinged tale is not unusual. Indeed, in the insular world of New York and D.C. politics, Huma Abedin has become a sort of mythical figure. [Link]

p>Huma was born in Michigan to an Indian father and a Pakistani mother. She interned at the White House in the mid-90s and graduated from GW. If she goes on to become Chief of Staff it is entirely possible that she could broker a lasting peace in South Asia by helping to end the Kashmiri conflict. I’m just saying, if I was at the negotiation table I’d commit to any concession she proposed. Let’s give peace a chance.

“I think she has special powers,” said public-radio broadcaster Katia Dunn, who recently crossed paths with Ms. Abedin and Mrs. Clinton at a cafÃ© on Capitol Hill.

Ms. Dunn explained that she had heard about the “cult of Huma,” but had never met her. “All of a sudden, I turn around and there was this woman I now know to be Huma. And it wasn’t just that she was gorgeous–she did just sort of have this presence. She stopped me in my tracks for a second…” [Link]

p> For those of you who think that the “special powers” quote above is an exaggeration, check out this clip. She is as agile as a secret service agent in protecting Ms. Clinton from the attacking flags (apparently Clinton forgot to wear a flag pin on her lapel and the flags in the audience were really pissed). At the end of clip you can see her calming down some of the flags:

“This might seem too over-saccharine, but I love Huma,” said Oscar de la Renta, who is a personal friend and intensely loyal supporter of the Clintons. The legendary designer was speaking to The Observer on the phone from his compound in the Dominican Republic. He has known her for nearly a decade. Indeed, he noted, Ms. Abedin has actually been a guest at his island home. He described her as “discreet,” “loyal,” “beautiful” and “half-Pakistani.”

“She is an unbelievably feminine and gentle person, but at the same time she can accomplish so much,” offered Mr. de la Renta. He recalled that she had great style, but hastened to point out that “she’s a Muslim” and “she’s very conservative.”

“I always say I don’t want to die without seeing [Huma] in a strapless dress,” he said, with a laugh. But did the dapper dressmaker know, say, where his dream girl grew up?… [Link]

p>I never thought I’d have so much in common with Oscar de la Renta. Who knew? There are rumors that she once dated John Cusack for a while. That is not conservative. But honey, didn’t you watch High Fidelity? That bum is a commitment-phobe and it was always going to lead to a failed relationship. I’m not like that. I also love politics and believe in government service so we’d have a lot to talk about.

p>Now, as for the other rumors, I find them just disgusting. It is a combination of misogyny and racism that motivates the spreading of innuendo that Clinton is having a lesbian affair with her Muslim aide. It is dirty politics at its absolute worst (even worse than what happened to McCain in 2000). Some segment of our society (in both parties) just can’t accept one strong woman working with another without feeling threatened by it.

p>I’d like to conclude this post with what I predict would be some notable developments should Clinton win the Presidency and Huma accompany her to the White House:

p>1) Secret Service budget would be increased exponentially as it would need to staff up because of all the brown men that would suddenly become interested in seeing Clinton speak at events.

p>2) Peace between India and Pakistan. How could two nations that combined to form a Huma keep fighting?

p>3) Raghubir “the foil” Goyal would ask the White House Press Secretary, “ummm. so, how’s Huma? Did she say anything about me?” at every press briefing.

150 thoughts on “The first desi in the Oval Office?”