CNN’s Dr. Sanjay Gupta is just too damn perfect. He is a doctor (including combat neurosurgery), a journalist, a University of Michigan grad, has a perfect smile, and speaks out against drug use. I really believe that the Universe has a way of balancing out the existence of such people with DoppelgÃ¤ngers, “anti” people, who use their skills to aid the dark side. The story about Sona “Doc 420″ Patel, posted on our News Tab, makes me wonder if we have finally found the anti-Sanjay Gupta of the Indian American community. 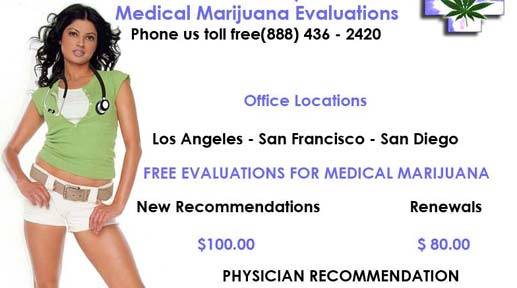 Six months ago, she started calling herself Doc 420 — 420 is the street slang for smoking marijuana.

Yes, she has a toll-free number, a Doc 420 Web site and a MySpace page with a picture.

Dan Noyes: “What did you hope to accomplish with this image?”

Sona Patel: “Well, you know what, it was just something that a marketing team had come up with for me…” [Link]

The article excerpted above is actually the transcript from a television story (including undercover camera work), the video of which is posted on the site.

First, I should say that a part of me admires the hot Doc420. She is using existing loopholes in the California medical marijuana laws to maximize her profit. She definitely is not the only such “rogue” doctor. According to the ad above she already has three clinics in three cities and she is only 31! Her website shows that the clinics are very nice as well. Incidentally, her website has a note saying it is down for construction but will be re-opening today, presumably sans racy “Doc420″ ads. Thank goodness for screen capture. She must be feeling a little bit paranoid because of the undercover story, and probably with good reason. Even though California state laws allow for the distribution of weed for “medicinal reasons,” the feds do not, and will go after people that exploit the laws by freely writing prescriptions without good cause. For those wanting a clearer background on all this, 60 minutes devoted a great story to this problem just a few weeks ago. The problem for Sona is that she is caught on tape implying that just about any reason is good enough to be prescribed some marijuana by her.

The other issue here is her ad which “drips” with sex. In the under cover video when some potential clients approach her she acts very demurely, so I can give her the benefit of the doubt and believe that she isn’t using her sexuality on a daily basis. Even if it was a marketing team’s idea to dress her up like that, it was a bad call. No doctor should be that stupid. Citing an ad like this as evidence will undoubtedly bolster a prospective federal lawsuit against her.

I-Team Producer #1: “What if you don’t have a condition?”

Doc 420: “Well, most likely, people are using it for something whether you… really realize it or not, if it’s helping you sleep or calming your stress or there are so many different reasons that still qualify you. You may not even realize it.”

I-Team Producer #2: “It could be something like just I can’t sleep or whatever?”

Our producers went to the ATM, returned with cash, and after a few minutes emerged with a three-month recommendation for medical marijuana.

But Dr. Patel didn’t really diagnose our producer. She told him what would qualify him for medical marijuana with a series of leading questions. [Link]

Marijuana might eventually become legalized, even at the federal level. Sona’s problem is that the law just isn’t there yet. The extreme marketing decisions she’s made in order to maximize her profit (i.e., conflating her physical appearance with her competency to prescribe a controlled substance) may come back to haunt her. We’ll keep an eye on her story.