By now everybody has seen the news that the Deputy Mayor for Delhi, S.S. Bajwa, died over the weekend:

The deputy mayor of the Indian capital Delhi has died a day after being attacked by a horde of wild monkeys. SS Bajwa suffered serious head injuries when he fell from the first-floor terrace of his home on Saturday morning trying to fight off the monkeys. [Link] 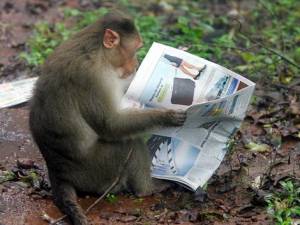 The coverage I’ve seen has generally been smirking, with photos like the one at right. The caption of that photo reads “Angry animal … a monkey in India”, even though it shows a monkey acting cute, and it’s above an article about Bajwa’s death.

I understand the urge to crack a joke about the matter in part because the whole story sounds implausible. That said, I want to resist the temptation to make light of this. Firstly, a person did die here. Secondly, it’s condescending, as in “Look and the wacky and quaint ways people die in India!” sort of like an Indian newspaper juxtaposing a photo of a cute puppy next to an article about Michael Vick’s Ving Rhames’ groundskeeper getting mauled to death.

Furthermore, this isn’t just about nature red in tooth and claw, it’s the actions of humans as well. Partly, this is the story, familiar in the west, about growing cities encroaching on the natural habitats of wildlife. But the bigger problem would seem to be that the monkeys are being fed by humans, which encourages their population to grow, and makes them far more aggressive:

Baiwa’s house is near a temple dedicated to Hanuman, the Hindu monkey god, where hundreds of monkeys gather every day to be fed offerings by devotees…human residents of the capital have long tolerated the monkeys, whose natural habitat is the surrounding forest, and many revere and feed them, believing them to be incarnations of Hanuman. [Link]

p> The problem has been ongoing for a while, and getting worse all the time:

In 2004 … the Supreme Court ordered that monkeys should be driven out of Delhi and local authorities started rounding up the macaques. First they sent them to monkey “prisons” on the outskirts of Delhi but animal rights activists complained. Then they sent hundreds to nearby states, where they were released into the forest. But several states have refused to accept more because they say that the “urban” monkeys steal food from villages and terrorise the indigenous monkeys.
In March the Delhi High Court ordered local authorities to capture all city monkeys and transfer them to a nearby wildlife park within three months. By May little progress had been made and members of the Indian parliament complained that monkeys were routinely entering official apartments and offices in central Delhi. [Link]

The city government says that it has advertised for people to join its current team of three monkey catchers but has received no responses, despite offering 450 rupees a monkey. Experts say that one of the only ways to keep the rhesus macaques at bay is to use the larger langur monkey to scare them off. Demand is now so great that their owners are said to be earning up to 10,000 rupees a month. [Link]

While I don’t know what the correct solution to the problem is, Mandirs feeding the monkeys in the middle of town seems to be a very bad thing. However, it’s precisely the sort of collision between faith and secular argumentation that both India and America are bad at handling. Given the politics of the BJP, I doubt the BJP led municipal government will be up to the task.

Update: You might also be interested in Slate’s what to do if you’re surrounded by angry macaques

When monkeys get aggressive, it’s usually because they think you have something to eat…If you are holding a snack, throw it in their direction, and they’ll stop bothering you. If you don’t have any food, hold out your open palms to show you’re not carrying a tasty treat or back away from the monkeys without showing fear. To diffuse the situation, don’t make eye contact or smile with your teeth showing–in the nonhuman primate world, these are almost always signs of aggression.

What if you can’t or won’t appease the monkeys with food? You can try to chase them off by shaking a stick at them, but they might get violent if cornered. If they don’t budge, bop ’em on the head; visitors to temples in India sometimes carry a stick for just this reason. Primatologists will sometimes send a macaque warning signal called the open-mouth threat. Basically, form an “O” with your mouth, lean toward them with your body and head, and raise your eyebrows. [Link]