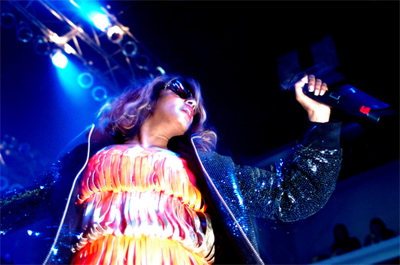 Our favorite Sri Lankan world runner played at Terminal 5 in NYC last night, as part of the CMJ showcase. Terminal 5 is cavernous space with two tiers of balconies, a giant bar island, and draconian crowd-control policies. They made you get into lines to go outside for a smoke.

Doors opened at 7pm. So with nothing but a faintly entertaining opening act (“we’re the new Black Beastie Boys!” was probably their best line) that didn’t do much to help kill the time until M.I.A. came on, people got drunk. Finally around 10pm her presence was felt rather than seen – a roaring, sucking noise as people stampeded toward the stage.

I think she opened with “Bamboo Banga,” but I don’t really remember too well. The next 80 minutes flew by in a blur of jaw-dropping energy, radiating charisma, mind-blowing mashups and the surreal spectacle of pretty white girls moaning “ajaa!!” M.I.A. prowled the vast stage with mesmerizing confidence. Garbed in a futuristic orange and silver flapper top, sliver (lame?) leggings, super sparkly jacket, leather-daddy/police hat, and silver high-tops. She was like an angry human disco ball. With only a DJ and regular backup dancer/singer Cherry behind her, she projected a raw power. When did our little girl grow up so much?

She invited people on stage to join her for “Bird Flu.” The ensuing scramble and dance-a-thon looked like the mad visionary’s multi-culti recasting of Fame … “There she goes” alright. You could barely make her out in the throng of gyrating dancers but there was no doubt about who was in control. 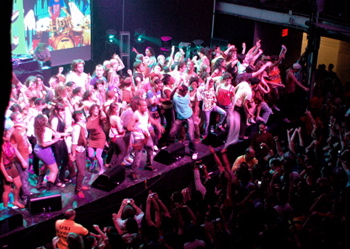 African “You think its tough now, Come to africa” Boy appeared for his verses on “Hussel” and she also brought out a dancer from Baltimore, from the same crew that Cherry belonged to, I think.

Perhaps because her new album is more global in scope, musically and lyrically, than Arular, or perhaps because of her recent visa issues, she’s definitely sliding away from espousing a pro-LTTE viewpoint. The stage was decidedly free of the LTTE flag, paper tigers, and other such military memorabilia.

Surprisingly, the audience (at least those around me) knew more lyrics to songs off Kala than those on Arular. I would have thought the first album was more accessible, but clearly not. Still, when she disappeared after the set, the crowd drew her back for an encored by chanting the refrain from “Galang”: “Yah yah heyeyyy, oye oye oh oh oh ya ya hey.” Seriously, not “M!I!A!” or just hooting and clapping. The whole audience sung the chant, as one, and didn’t stop.

How did this woman get a adenoidal fanboys and privileged hipsters chanting third-world refrains? How did she get them to mouth lyrics like, “One second, my phones ringing/It’s my friend Habibi”? Do they ever stop think about the militancy in lyrics like “I’m better off in North Korea/Yeah, droppin’ from a barrel of a carrier” or the pain in “In a faraway land we got shit made/Ray-Ban shades, warheads laid/Babies born in air raids”? Are they just drawn to the fun of lines like “All I wanna do is (BANG BANG BANG BANG!) And (KKKAAAA CHING!) And take your money”?

Photos by William Kirk at Pitchfork.com.

60 thoughts on “Coming Back with Power Power: MIA @ CMJ”