Burma is in the midst of its largest protests against the military junta since 1988, when the government crushed the pro-democracy movement by killing at least 3,000 people. 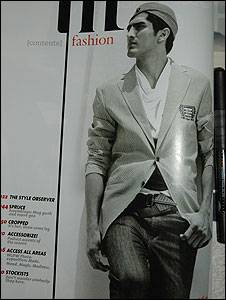 The current wave of protests reached its peak on Monday, when red-clad monks led a demonstration of over 50,000 people in the capital, with protests happening in 24 other towns around the country as well. In response, the junta imposed a curfew and has shot at least two protestors who defied the orders.

The only countries with real influence over Burma are its neighbors: China, India and Thailand. Neither China nor Thailand are democratic, so I hadn’t expected much from them, but I have been really disappointed in India’s response.

“It is too early to say anything,” said an Indian Foreign Ministry official, who did not want to be named. [Link]

India’s biggest company, the state-owned Oil and Natural Gas Corporation, is to invest Â£75m in exploring for gas off the coast of Burma, despite the swell of pro-democracy protests against the country’s military regime. The deal signed on Monday highlighted how Burma has exploited the energy needs of its two biggest neighbours, India and China, to weaken western sanctions. [Link]

That’s right, the state run oil and gas corporation signed a deal with the Burmese government on the very same day when 50,000 demonstrators were in the streets of the capital. That sends a very clear message about which side they’re on. Here’s an in-your face interpretation of India’s actions in a political cartoon (also below the fold).

p>Furthermore, the GOI has been consistent in its refusal to criticize the Burmese government:

Earlier this month the Indian foreign minister, Pranab Mukherjee, refused to put pressure on the Burmese junta to take steps towards democracy. “The cardinal principle of our foreign policy is non-interference in the domestic affairs of any country,” he told reporters in Bangkok. [Link]

p>For one thing, India wants Burma’s help fighting rebels on their shared border. In return for this help, they are helping Burma bypass the EU arms embargo, and even helping train the Burmese military. This is pretty heavy support.

p>The other is that India wants Burmese natural gas, and is afraid that China will take advantage of it if they do not. So both to feed their own economy, and to block China’s, they are willing to make deals with the junta and leave the Burmese people to … fend for themselves against the military that they have helped to arm and train. Given that the Burmese military is a almost a half a million strong (just a smidge smaller than the American active duty Army), it’s hardly a fair fight.

p>Hmmm – a powerful country that puts security and energy above human rights and principle. Hmmmm ….. never heard that one before.

p>Related posts: Realpolitik with Burma, An Important Message, Which Has Nothing to do with Spelling

p>The material below – both the facts and the rude political cartoon were taken from a Human Rights in Burma website. 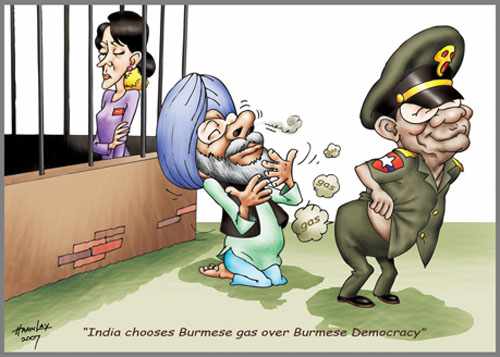