Forbes‘s annual “100 most powerful women” list names Indra Nooyi, Chairman & CEO of PepsiCo the #5 most powerful woman in the world and the most powerful Desi woman. She edges out #6 – Sonia Gandhi, President of the Congress Party — thus creating a pretty impressive showing in the top 10. The final desi on the list, and a previously unknown one to me – #97 Vidya Chhabria – hails from the UAE. 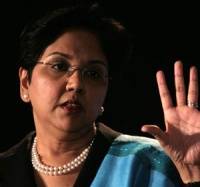 A hearty SM congrats all around.

Worth noting – Pratibha Patil gets a nod as a “powerful woman behind the woman”; now that will get some SM tongues wagging.

119 thoughts on “The Most Powerful Desi Women in the World”