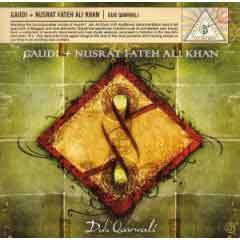 Nusrat Fateh Ali Khan has a new CD out. While that may seem unlikely, given that he passed away ten years ago, it’s true. Italian/British producer Gaudi took old master tapes from the early 1970s in the possession of Nusrat’s original Pakistani record label (Rehmat Gramohpone), and reinterpreted them with Dub/Reggae beats. The sound is fresh, if not technically new — a successful way to bring back the ghost of Nusrat in a recording studio. Dub Qawwali has recently been released on Six Degrees Records; Gaudi was interviewed by NPR here.

Dub Qawwali is a collection of Nusrat songs that, for the most part, I hadn’t heard before, though admittedly my Nusrat collection is hardly definitive. The production quality, for those who pay attention to such things, is flawless, and the sound is “warm” — mainly because Gaudi used live musicians and vintage analog equipment to create a rich soundscape. It’s most definitely not the cheesy Bally Sagoo remix approach, where you get the feeling that the whole thing was put together on a computer by a stoned teenager. Here is how the record label describes the approach:

The use of vintage analogue studio equipment and dub production techniques such as tape echoes, valve amps, Fender Rhodes, spring reverbs, Hammond organ and Moog, characterizes Gaudi’s production style, however it is not without its share of 21st century intervention and wizardryâ€¦ Individual tracks from the original 70′s multi-track recordings often contained multiple parts together on them. These had to then be carefully cleaned up in order to make them usable in a way that would enable the composition of these new works. (This included much of the vocal parts which were mixed in the same track as the Harmonium and other instruments!) (link)

The one possible flaw, and it’s debatable, might be that the songs on Dub Qawwali are almost too mellow. Nusrat, as videos like this might attest, was at times a frenetic, ecstatic performer, not a chilled out crooner. On the other hand, he did do some ‘slow’ records — and there must be a time and place for mellow for everyone.

So it’s not rapture, but a different kind of transport, the gentle vocal nurturing of a shared spiritual journey. And healing, and peace: here, Nusrat’s voice acts as a kind of salve, easing the pain of existence… that, for me, is Nusrat’s ghost.

Apropos of that, one song Gaudi reworks on this CD, which I had heard before, is the classic ghazal “Jab Tere Dard”:

(You can listen to the original, non remixed version here)

A prize goes to the person who translates the above lines first (give a link to your email address).

46 thoughts on “The Ghosts of Nusrat: Dub Qawwali”