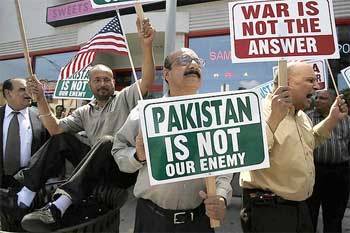 Every time Obama goes down to Devon Avenue he seems to raise a ruckus (see previous post). This afternoon in Chicago:

A small group of protesters assembled this afternoon across the street from an Indian restaurant in Chicago where Democratic presidential candidate Sen. Barack Obama was holding a fundraiser.

The mostly Pakistani group chanted anti-Obama slogans in response to a threat the Illinois Democrat made last week about his willingness, if elected president, to launch unilateral American military strikes against Al Qaeda havens in a remote border region of Pakistan.

“Obama, hypocrite,” the group repeatedly chanted, as some of the 25 or so assembled held signs that read “Sen. Obama, Good speaker. But no clue what to speak” and “Obama equal Osama,” a reference to Al Qaeda leader Osama bin Laden. [Link]

To recap, the main reason this small group of Pakistani Americans were protesting Osama Obama was covered here recently by Amardeep.

“Barack Obama is advocating bombing an entire nation. This man is not our friend,” said Andy Thayer, a spokesman for the Chicago Coalition Against War. “Hillary Clinton is also not our friend. She called for not taking the nuclear option off the table…” [Link]

Hold up there Andy. He might have advocated a little bombing but at least he swore it would not be nuclear! Stop painting things with such a wide brush. Presidential candidate Joe Biden recently pointed out the obvious by the way. We already routinely violate Pakistani sovereignty (probably with SEAL Teams). We just got to be hush hush about it so that the Pakistani population doesn’t give Mushie a hard time because of it.

“â€¦ in order to look tough, he’s undermined his ability to be tough, were he president. Because if you’re going to go into Pakistan — which is already our policy by the way, if there’s actionable intelligence — you need actionable intelligence from moderates within Pakistan working with you. Now if you’re already going to say I’m going to disregard whatever the country thinks and going to invade, the likelihood you’re getting the cooperation you need evaporates. It’s a well intended notion he has, but it’s a very naÃ¯ve way of figuring out how you’re going to conduct foreign policy…” [Link]

p>At least Obama was willing to talk things over with the Pakistanis gathered outside:

Obama spokesman Ben LaBolt said Obama offered to meet privately with a small group of the protesters following the fundraising lunch, but they declined the offer. [Link]

p>The problem is that Obama has fallen into the classic liberal trap. He is trying too hard to prove he is not “soft” on terror and thereby undermining his greatest strength: His ability to intelligently see the nuance in major policy.

“His image was that he is not a macho guy, so he wanted to prove that he’s a macho, macho man,” said Ifti Nasim, one of the organizers. [Link]

Maybe, but another thought is that Obama is simply trying to bring new ideas to the table. Not all of them will turn out to be the right ideas but those that support him do so for the very reason that he is not afraid to bring new thoughts to old problems. Incidentally, Obama was set to raise ~$75,000 at the Indian restaurant mentioned above (hosted by Tariq Siddiqi, a Chicago real estate developer). Since Indian Americans donate more money to campaigns than Pakistani Americans, maybe all this bad publicity won’t be too hard on the war chest.