One of the Christian Science Monitor’s reporters recently caught a showing of the apparently eagerly awaited film “Khuda ke Liye (In the Name of God)” in Lahore: 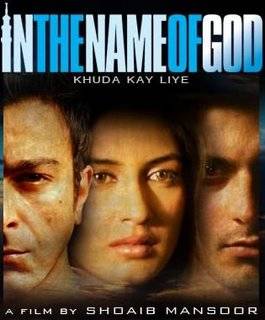 As the title suggests, the movie is about Islam and the battle between two polarized groups – modernized elites carrying the banner of “enlightened moderation” and radicals with their “jihad” – both had claims to the religion…

For many Pakistanis – or at least those in this theater – the movie offers an explanation for the unrest around them.

“I had been dying to see this movie,” Sara Malik, a 17-year-old student, dressed in jeans and a powder-pink T-shirt told me after the movie. “It’s an amazing story, because it explains what really happens behind things like the Lal Masjid [Red Mosque],” she said, with nods of agreement by nearby school friends. The violent weeklong battle between religious militants and the Pakistan Army this month in Islamabad was unnerving for the entire country and unlike anything the youth of the country had ever witnessed. [Link]

p>A synopsis of the movie, about musician brothers caught up in a post September 11th world, can be found on the film’s website. Adding to the local relevancy of the film (as mentioned by the young woman above) was the recent Lal Masjid siege (a.k.a. Operation Sunrise) against the militant Ghazi brothers:

Abdul Rashid Ghazi of the Red Mosque, for example, made one of his last anti-vice stands against the release of “In the Name of God.” Mr. Ghazi called the movie blasphemous and anti-Islamic. “We won’t allow this,” he warned the government earlier this month.

Ghazi was killed a few days after uttering those words at the hands of the Pakistani military, and the movie is now showing all over the Punjab province, the Pakistan Army’s stronghold, in the city of Karachi the financial capital, and a few well-to-do surrounding towns in Sindh. It is unlikely to make its way west to the provinces bordering Afghanistan and Iran. The uncensored movie is not only likely to be rejected by the provincial governments led by Islamist parties, but also by the Pashtun and Baluchi tribes themselves, who are portrayed as violent, cunning, and chauvinistic religious fanatics in the movie. [Link]

p>If any SM readers end up seeing the movie please let us know what you think and if it accurately captures the mood in Pakistan. I also wanted to point out that the soundtrack sounds pretty damn good…as you’d expect from a movie about musicians. In fact, director Shoaib Mansoor says the inspiration for the movie came from the real life band “Vital Signs“:

The inspiration for the movie, Mr. Mansoor writes, came from Junaid Jamshed, the former lead singer for Pakistan’s most successful rock band, Vital Signs. Like the lead character in the movie, Mr. Jamshed turned from rock star to mullah after 2001.

Jamshed was once a joyous icon for the Western-looking youth of the 1980s, after the Soviet-Afghan War and the Islamic military rule of Gen. Zia-ul-Haq came to an end. But six years ago, he turned a corner and quickly became one of the most high-profile Islamic preachers associated with the Tablighi Jamaat, a Muslim missionary group that spans the globe. [Link]

18 thoughts on “The biggest movie since Titanic…in Pakistan”