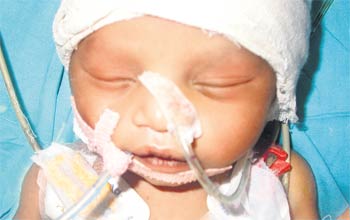 I think it was Camille who originally alerted us to the horrific discovery of a baby in Bombay, who had been stabbed almost to death, before being thrown in the garbage.

A newborn Indian baby found abandoned with 26 stab wounds has survived, doctors said on Wednesday, despite a cracked skull and exposed intestines.

The baby boy, who doctors said was aged between one and two days, was discovered soaked in blood at a garbage dump in India’s financial capital of Mumbai on Tuesday, they said.

His intestines were hanging out from a deep wound on his back and he had dirt and garbage stuck on him.

“When he was brought in he looked pale from blood loss,” said Ramesh Hatti, a doctor at a city hospital.

“He is still in a lot of pain but is now stable.”

Police have not been able to trace the baby’s parents or establish a reason for the attack.

Babies are sometimes abandoned by unwed Indian mothers, who fear severe social repercussions for having a child out of wedlock. [CNN]

Today, another tipster emailed us an update– via The Mumbai Mirror:

The good news is that the infant is doing well…Dr Oak said he has been taken off the ventilator. â€œHe is able to breathe on his own but he is too young and vulnerable to infection. So, we may keep him in the ICU for a few days,â€ he said.

The phone has been ringing off the hook, at the hospital.

Many callers were eager to adopt the little one. A woman called up the Mumbai Mirror office and said, â€œHow can I adopt the baby? What is the procedure. How can I help this child?â€

According to Madhuri Mhatre, a social worker with an adoption agency called Bal Anand, â€œAdoption takes a lot of time because we have to be sure that the child goes into a good family. We check the legal, financial and domestic background of all prospective parents.â€

In any case, doctors said, it is too early to speak of adoption.

This tiny little fighter is so lucky, so fierce:

A milkman saw the bleeding child in a garbage dump outside Lokhandwala complex at Kandivli (W) on Tuesday morning. He rushed the baby to Bhagwati hospital in Borivli. But since Bhagwati was not equipped to take care of the injured infant, he was sent to B Y L Nair Hospital. Doctors carried out a two-hour operation on Tuesday night to close the wounds and replace lost blood. He was then put on a ventilator.

I get chills every time I read that. How many times did this child slip through death’s fingers…

Since government-run childrenâ€™s homes do not often handle newborns, the department will contact NGOs who have the expertise to do so.

â€œAt the same time, I have instructed my officials to check out if the government-run childrenâ€™s homes in Mumbai and Pune have the facilities to take care of the baby,â€ said Dr Singh, who is unhappy about too much publicity being given to the babyâ€™s wounds.

He says such images can cause distress among citizens.

Oh, boo-hoo. There can’t be enough publicity, if it inspires much-necessary outrage and reasserts the power of shame. The elderly and the newly-born are not garbage, to be disposed of when inconvenient.