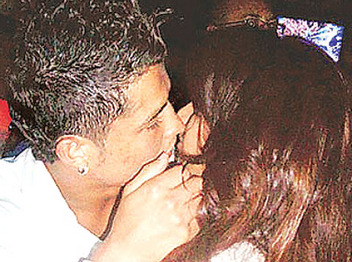 They were hosting the Seven Wonders of the World party in Lisbon together. And they got along so well:

Revealing the details, she said: “I felt like a princess. He gave me so many compliments. He danced with me throughout the night. There were 50,000 jealous women staring at us. I must’ve got so much Portuguese bud-dua (bad wishes) that night. The local girls wanted to murder me. Now he wants to e-mail me regularly.”

During dinner Cristiano told Bipasha that he was a big fan of Bollywood. “I thought he was just trying to be sweet. I told him he didn’t have to say he liked Bollywood films just to please me.

“Cristiano fished out his cell phone and made me hear Tujhse naraaz nahin from Masoom. He said, ‘Now do you believe me?’

Bipasha laughs about her interaction with the soccer star. “Though he looks older, Cristiano is very young, just a boy. Now I’ve told him, I’m only his fan on the field. Beyond the field he’s my friend. [HT]

He is young, just 22, and this detail apparently bothers many. How dare she! A younger man!

What does SHE have to say for herself?

Cristiano Ronaldo may not have been at a social distance when the photo being splashed on TV screens and the internet was clicked using a cell phone camera, but it isn’t a kiss that the photo shows, and definitely not a lip lock, says the livid bongshell.

“All the joy of that meeting with my favorite footballer has evaporated,” she laments.

“I don’t need to explain my behavior. I’m a free-spirited person. But I’m not footloose. It takes me a long time to become close to anyone. I’m certainly not some giddyheaded teenager who would get so carried away in Ronaldo’s company that I’d kiss him in public. My business manager Tanuja and dress designer Rocky S were present, would I be that dumb? There are far more discreet and private places to do such things. Even if I was single, I would not get carried away at my first meeting with a 22-year-old boy, no matter how big a celebrity he is, to misbehave with him in public.” [SAWF]

And her forlorn, forsaken, half-Mallu honey?

“When John started surfing the Net, he was shocked to see pictures of Bipasha splashed everywhere. Obviously, Bipasha had not informed him about this episode. John seemed very upset and what added to his misery was that everyone knew about the episode.”

John was very embarrassed to face anyone…and preferred to be alone after he learnt about the controversy. [TOI]

John. Poor, dear murungakkai of mine– if you need a shoulder to cry on…I’m all yours…unless Sunkrish Bala calls, that is.