As usual, biz has me on the road accumulating airmiles… and the usual upside is some unbroken reading time — most recently with Gurcharan Das‘s India Unbound. 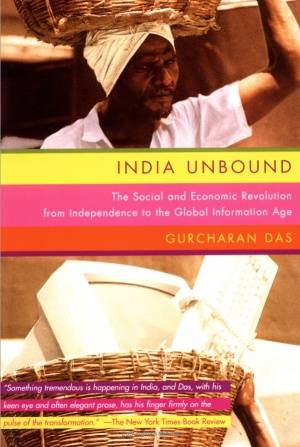 The book is well written and covers a wide span of Indian history and issues both from Das’s direct (and apparently quite privileged) experience as well as his clearly thorough research. Emotionally laced with optimism for the future and regret for the past, this nonfiction book struck a chord in a way I imagine some find in escapist lit. Call it Bridget Jones for the econ-minded. Amartya Sen’s comments on the book are particularly interesting.

Das tackles the age old, highly politicized question of “Why was India rich, why is it poor, and when will it be rich again?” In the dozens of cases Das presents, one particularly unique example is a famous battle of antiquity and the first large scale military interaction between Desi’s and the West – the Battle of Hydaspes River in 327 BC.

The battle pitted Alexander the Great’s Macedonians against Porus (the Hellenic version of “Rama Puru”), leader of the Kingdom of Paurava in what is now the Pakistani section of ancient Punjab. Beyond the general intrigue and war narrative – feints, maneuver, logistics, and so on – Das finds a nugget of explanatory wisdom to his question – Teamwork.

Alternatively, the interpretation that both Das and moi come down on, connects “organized violence” to “ideas or values” far more directly. One favorite writer of mine, Victor Davis Hanson, presents this opposing view and has this to say about the cultural significance of the Greek Phalanxes facing Puru –

…the phalanx was more than a singularly deadly infantry unit or a psychological weapon of terror. Its dense columns also reflected the solidarity of free men, who willingly donned heavy armor under the Mediterranean sun, crowded with one another in cumbersome rows, marched in unison — and defined courage as following orders, advancing on command and in rank, and protecting one’s comrade on the left. Aristotle thought the city-state — the very beginning of Western civilization — was identified by the emergence of such a strange way of fighting. Indeed, the polis arose, he wrote, when a new class of farmers — Europe’s first middle class of free property owners — began to fight in unison in these serried ranks, armored columns that other men, whether aristocrats, the poor, or those outside the Greek world, could not or would not emulate.

In this world view, the a priori choice for mankind over the long arc of history isn’t between violence and non-violence per se but rather between organized (law & military) and disorganized (crime, corruption & melee-style battle) violence. Cultural principles in turn determined where on this continuum a society lay — for the Greeks, the principles embodied in their style of organized violence were Equality + Teamwork. The Greek’s way of war, life, and governance were inextricably interlinked.

Folks who saw Oliver Stone’s Alexander may remember an, er, apparent portrayal of the Battle of Hydaspes River towards the end of the movie (alas, Stone devotes more filmtime to Alexander’s homosexuality vs. the specifics any particular battle). In some of the more visually arresting scenes of the movie, fish-out-of-water Macedonian phalanxes clash with monstrous elephants in a Vietnam-like jungle setting. A scene from the trailer shows a blood-spattered, wide-eyed Alexander (portrayed by a golden locked Colin Farrell) galloping down a jungle hillside on his noble horse Bucephalus to be challenged by a rearing war elephant….

Now, contrary to the Stone’s implicit portrayal, history generally considers Hydaspes River a decisive, brilliant victory (albeit possibly Pyrrhic) for Alexander — one that marked the furthest eastward expansion of his empire and perhaps the highpoint of an already legendary career. Wikipedia has a fine entry on the battle but for pure narrative power, I prefer this, more colorful take or this one for tactical analysis.

Although the initial order of battle may have tipped raw manpower in Alexander’s favor, Puru still had significant advantages in other, crucial areas –

But… Puru lost. Though with tremendous honor and courage. Unlike Alexander’s nemesis Darius, Puru fought at the front with his men. And… –

..unlike the king of Persia, Puru did not flee nor surrender. Despite losing the battle, he kept fighting and goading his men to keep their honor. Alexander’s forces were impressed by both his size and his courage. It was only when he was hit by a dart on his right shoulder that, wounded and tired, he turned his elephant to safety… Soon, two envoys from Alexander came up to him. Loss of blood had made him intolerably thirsty. He halted his elephant and got down. Alexander’s envoys honored him and gave him water to drink and he commanded them to lead him to their king

As Puru neared the Macedonian lines, Alexander came galloping out to meet him. He was filled with admiration for his brave and proud adversary and asked Puru how he wished to be treated. “Treat me, Alexander, as you would treat a king,” replied Puru. Alexander was confused and asked him to be more precise. “When I said ‘a king,’” repeated Puru, “everything was said.” [Das, 39-40]

While militaries throughout history have had their class distinctions – heck, officer commissions were “purchased” by upper class Brits until the 20th century – they ran far more deeply in Puru’s army with far more significant tactical implications –

… beneath the surface, there were important differences between the two armies.. [such as] divisions in Indian society , which resulted in poor coordination in Puru’s army. Puru’s cavalry refused to aid the infantry. On the soggy banks of the [Hydaspes] that morning, Puru’s chariots got stuck and charioteers were unwilling to double up as infantry…

Puru’s upper-caste mounted cavalry did not sufficiently support the lower-caste soldier who was on foot. Jadunath Sarkar, an authority on ancient and medieval military affairs said that although “the Indian defenders of the Punjab were brave, each man fought to death in isolation.” The solders were “unable to make a mass movement in concert with their brethren of other corps.”

…Puru may have lost to the greatest general of his time, but the theme of poor teamwork runs throughout Indian history. Babur’s victories at Panipat and at Khanwa (against the Rajput confederacy, led by Rana Sangha) were partly a result of the same deficiencies. Although the Marathas had more cohesive armies, they too suffered because some subcastes armed themselves against others. [Das, pg 41]

And thus, as the ancient world gave way to a more modern world, and a “strange way of fighting” emerged where courage meant roles, teams, and tactics rather than heroic individual warriors. Along with it, the basis of wealth and governance shifted from artisans, kings and subjects to employees, officials, and citizens. And somewhere along the way, India fell behind… (Per the taxonomy in this article, India remained mired in a type of “limited access” society vs. “open access” warfare of the West).

But, all is not lost. Das’s book is fundamentally optimistic and hopeful and sees the basis for change all over India. On teamwork in particular, he readily draws the connection between competitive necessity and cultural transformation –

I believe that with more competition in the Indian market, we will get better teamwork in the business world. When companies fight for survival, there is less luxury for egotistical behavior; we sink or swim together. Since the 1991 reforms Indian markets have become more competitive, cohesion should gradually increase…. [Das, pg 43]

I readily share Das’s optimism and the seeds not just for Desi progress but actually greatness. The rise of large, efficient Indian corporations like Wipro and Infosys readily indicate that for at least one bleeding edge of society, the teamwork problem is being licked.