Gustavo Arellano runs a nationally syndicated column titled “Ask a Mexican” which began three years ago (first as a joke) in the OC Weekly. A while back, over the tip-line, someone suggested we run a similar column. I think it’s a good idea. I think I’m gonna do it. I’m gonna be the “Desi” with the answers. So…if you have any questions for a Desi (or Indian, South Asian, whatever you prefer) I am now your man. Send them my way at abhi [at] sepiamutiny dot com. I will try to answer at least one question a week and I will only tackle questions sent via email and not via the comments. I will more than likely ask my bunker mates to opine on certain inquiries, especially if they are more qualified desis for a particular question. To get you in the mood, here is the latest “Ask a Mexican” column:

Q: Is it true that there are a lot more Mexicans hooking up with East Indians now? I know a few mixed Mexican-Indian couples, and I’ve heard that in some parts of the country, there are communities full of Mexican Hindus (products of Mexican-East Indian intermarriage). Is it true that this is a rising trend? If so, do you have any advice for young Indian-Americans interested in attracting Mexican girls or guys? 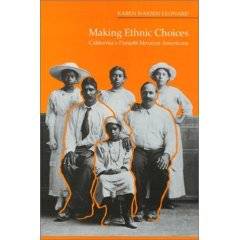 A: Dear Other Type of Indian: I try not to answer questions about interethnic amor (that’s more of a Dan Savage thing), but I’ll run yours because it allows me to plug Making Ethnic Choices: California’s Punjabi Mexican Americans. This fascinating 1994 ethnography by University of California Irvine anthropology professor Karen Leonard studies Mexican women in the United States who married men from the Punjab region of what’s now India and Pakistan during the first half of the 20th century. There are muchos similarities between Mexican and Punjabi cultures — a love of flatbreads (tortillas and rotis), spicy cuisine and loud, drum-based music (banda and bhangra, respectively) — but Leonard concludes that American immigration policies barring most Asian women from entering this country inspired many of the unions, and that both Mexican and Indian-American communities (never mind the gabachos) discriminated against these families… [Link]

Please, ask this macaca all kinds of questions and not just cheesy relationship questions. I just want to heal. Like Dr. Phil. Or Frasier Crane.