Sometimes, you mutineers will see a story which you practically demand we post. After New York Magazineâ€™s â€œThe Look Bookâ€ slyly dissed and dismissed a brownie who works in Private Equity who emphasized,

“I love to consume. Consuming is my specialty.”

…some of you started screeching louder than the Howler monkeys in the bunkerâ€”and thatâ€™s saying a LOT.

Natasha Mitra (r) was interviewed by Amy Larocca and though I was also left smirking at the catty aftermath, I immediately heard the diminutive angel on my shoulder remind me that we donâ€™t know how many questions were asked and then not included, whether Mitraâ€™s words were edited to paint her a certain way, etc.

Having typed that, if my little sister sounded like this, Iâ€™d beat her with my red Ferragamo loafer. Not that thereâ€™s anything wrong with…sounding…like…this.

My bag was a really special purchase. I work with this woman at Louis Vuittonâ€”she picks things out for me, sends pictures, and tells me to pick what I like. She called one day and was like, â€œI picked a bag for you, and Iâ€™m sending it to your house because I know youâ€™re going to love it.â€ I think itâ€™s called the Stratus.

How old are you?

Was the bag expensive?

Yesâ€”about $3,500. I guess a lot of craftsmanship goes into it. Accessories for me are the key. I have about twenty bags, and I donâ€™t know how many shoes. But theyâ€™re Vuitton, theyâ€™re Versace, theyâ€™re Gucci, and theyâ€™re Dior.

Theyâ€™re D&G. I was really excited to find them. Theyâ€™re wild and crazy and different.

What do you do for a living?

I work in private equity. I love the sector that I work in, which is the consumer and retail group. Itâ€™s an area that Iâ€™m passionate about. I love to consume. Consuming is my specialty.

You picked the right career.

Iâ€™m going to Harvard Business School in September. Moving is definitely going to be the most difficult part of the experience.

Thoughts? After reading some of your emails, I’m tempted to respond with a “Tell us what you REALLY think”, but I’m certain you will already do that. I also look forward to the inevitable, “I know her, and, and–” which will appear below at some point. TWO DEGREES of separation, people. The fact that we couldn’t prove it with two random desi models doesn’t mean the theory is invalid, aight?

Because one of you who should know better shamelessly suggested it AND because I already received one vague piece of hate mail which mindlessly accused me of hypocritically not putting myself out there for dissection the way I heartlessly did to Miss Mitra above, feel free to ponder my homage to Natasha, below. 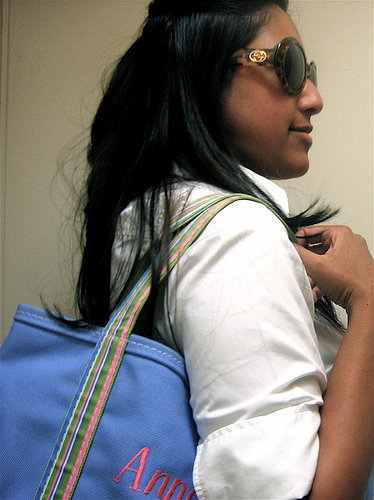 Not being a slave to fashion: priceless.

There are some things money can’t buy (like good taste and shame– I would know, I can’t find any of the latter to purchase). For everything else at Tyson’s Galleria/Corner, there’s MasterCard.