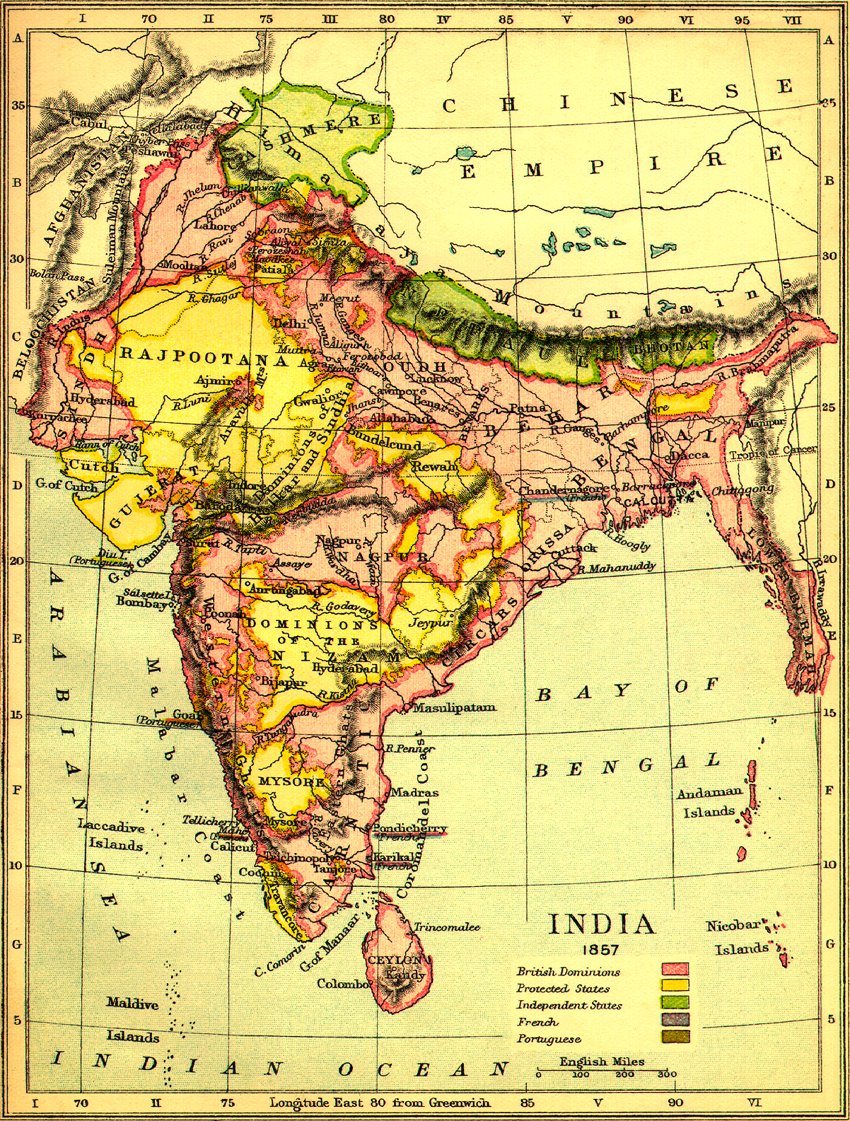 If we had a tradition of open threads here, I would just open one here today and ask all of y’all to share your thoughts on the Sepoy Mutiny, a.k.a. Rebellion, a.k.a. First War of Independence, a.k.a. perhaps some other name, depending on your viewpoint and the importance you assign to nomenclature in history. I know shamefully little about this fundamental event in the history of the Indian Subcontinent, and even less about the debates that it has spurred among historians, except that I know that these have been complicated and sometimes heated.

But today marks the official sesquicentennial commemoration of the start of the Mutiny/Rebellion/War, and by way of launching the conversation, I present three different takes that are in the news today. First we have Mani Shankar Aiyar, India’s Minister of Youth Affairs and Sports, who gave the official start to a youth march from Meerut to Delhi a couple of days ago. His remarks to a RediffNews correspondent emphasized the secular nature of the uprising; he observed that India today can learn from the uprising the importance of pluralism, secularism and religious understanding:

The significance of 1857 for today’s youth is that it makes you realise that we all are one people in spite of our diversity.

The freedom-fighters who revolted against the British in 1857 were mostly Hindus in Meerut. After disobeying their British superiors they went straight to the Mughal king, Bahadur Shah Zafar, and made him their king.

They had no ill-feeling for the Mughal king though he was a Muslim. This is the kind of secular bonding these soldiers had in them.

Our young generation must remember that united we stand, and though we are a diverse people we have to maintain our unity. That is what the message of 1857 was to all Indians. …

This is another message that Bahadur Shah Zafar and the freedom-fighters of 1857 wanted to pass on to the future generations. No matter what your religion and region be, respect all religion and maintain harmony. …

We have to remember the fact that India has the second largest Muslim population in the world. We have more Muslims than in Pakistan and Bangladesh but we Indians live together peacefully and I am proud to say all Muslims are my brothers.

Next up is the White Mughal himself, William Dalrymple Saheb. You knew he’d turn up somewhere! In an opinion piece today in the Guardian he argues that 1857 bears lessons for certain other interventions and occupations that Britain might happen to be involved in today. Here’s one of the similarities he points out:

The British progressed from removing threatening Muslim rulers to annexing even the most pliant Islamic states. In February 1856 they marched into Avadh, also known by the British as Oudh. To support the annexation, a “dodgy dossier” was produced before parliament, so full of distortions and exaggerations that one British official who had been involved in the operation described the parliamentary blue book (or paper) on Oudh as “a fiction of official penmanship, [an] Oriental romance” that was refuted “by one simple and obstinate fact”, that the conquered people of Avadh clearly “preferred the slandered regime” of the Nawab “to the grasping but rose-coloured government of the company”.

Yet the lessons of 1857 are very clear. No one likes people of a different faith conquering them, or force-feeding them improving ideas at the point of a bayonet. The British in 1857 discovered what the US and Israel are learning now, that nothing so easily radicalises a people against them, or so undermines the moderate aspect of Islam, as aggressive western intrusion in the east. The histories of Islamic fundamentalism and western imperialism have, after all, long been closely and dangerously intertwined. In a curious but very concrete way, the fundamentalists of all three Abrahamic faiths have always needed each other to reinforce each other’s prejudices and hatreds. The venom of one provides the lifeblood of the others.

Before we go too far down that track, here’s a third perspective, from Rudrangshu Mukherjee in the Telegraph:

[I am] surprise[d] at the sudden burst of enthusiasm among historians about the great uprising. There is nothing like a state-sponsored anniversary to stoke the interests of historians in a subject. The adjective, state-sponsored, is used advisedly. In a country with as rich and as diverse a history as Indiaâ€™s, every year is an anniversary of something or the other. In June will come the 250th anniversary of the battle of Plassey. Is the Indian state celebrating that anniversary? The answer is no. The decision to celebrate the revolt of 1857 with some fanfare is based on the conclusion â€” put forward by some historians and accepted by the government of India â€” that the rebellion is worth celebrating because it represented Indiaâ€™s first war of independence.

Mukherjee argues that “1857 should be remembered but not commemorated,” because of the extreme violence of both the insurrection and the counter-insurrection.

The events of 1857 churned around a vicious cycle of violence. The rebels killed mercilessly without considerations of gender and age. Witness the massacre on the river in Kanpur where nearly the entire British population was killed in a spectacular show of rebel power. The British killed indiscriminately to punish a population that had transgressed the monopoly of violence that rulers have over the ruled.

Today, as the celebrations begin to mark the 150th anniversary of the rebellion, some questions need to be asked: is 1857 an occasion to celebrate? Can the Indian state uphold the violence that is inextricably linked to that year? Can the Indian state say that it is loyal to the ideals of Mahatma Gandhi, the apostle of non-violence, and in the same breath celebrate 1857 when so many innocent people, on both sides, were brutally killed?

The questions are important because in India, there is no mode of remembering without celebrating. We commemorate to remember, sometimes even to forget. Eighteen fifty-seven is an event to remember, as all events of the past are; it is an event to comprehend and analyse because, as Jawaharlal Nehru wrote, it showed â€œman at his worst”. That comprehension and analysis is best done outside the aegis of the State.

I present these three perspectives somewhat arbitrarily. I imagine there are many others and I hope people will share them, honest in their opinions and generous with their explanations.