Last week I was standing in a bookstore, looking for something trashy and utterly mindless to buy. I picked up Deborah Rodriguez’s “Kabul Beauty School: An American Woman Goes Behind the Veil.” and read the first chapter, which was around all I could handle.

I realize that I was far from the target audience for such a book. I’ve never had a haircut in my life, and I’ve never been to a spa. I’m not a very sympathetic audience for stories about how the women of Kabul felt better inside because they felt more glamorous outside (well, inside their burkas). Furthermore, I am a guy, and this was a tremendously girly book: 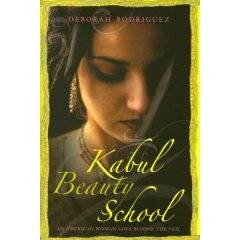 When Deborah Rodriguez arrived in Kabul in 2002 as part of a charitable aid mission, what she saw appalled her… It was a land of bad haircuts, poorly applied makeup and no styling gel. To Rodriguez, a Michigan hairdresser with a can-do attitude, task No. 1 was obvious: get these poor people some beauty salons. [Link]

p>Despite my lack of personal experience with the topic, I was willing to suspend disbelief and work with the book’s basic premise, namely:

…hairdressing … is one of the few truly viable options for would-be female Afghan entrepreneurs. There’s a huge demand for such services, as many Afghan women sport elaborate hair and makeup styles under their burqas. At the same time, it’s work that can be done entirely in female company – a necessity in a segregated society. [Link]

p>My problem was not the subject but the condescending tone of the book. It was “City of Joy” meets “Steel Magnolias,” the usual story of somebody in the first world who finds their calling “helping” people in the third world, where the only purpose of the poor and unfortunate is to serve as a backdrop to the protagonist’s journey.

For example, the opening chapter tells of “Roshanna,” a friend who had been raped and thus was no longer a virgin. Roshanna was terrified of her wedding night, when eager crowds await a bloody rag — the telltale sign of virginity.

Ms. Rodriguez sprung into action, whipping out nail clippers, cutting her finger, dripping blood on a handkerchief and instructing Roshanna to place it under a cushion. When the time came, she could swap it with another one. The next morning, she writes: “When I rush into the hallway, I see that Roshanna’s mother is wailing for joy. ‘Virgin!’ she shouts at me triumphantly, waving the handkerchief stained with my blood. ‘Virgin!’ “… [Link]

p>C’mon now. Afghan women have never figured out how to fool their husbands with chicken blood after thousands of years? It took a spunky hairdresser from Michigan with a can do attitude to come up with this? Roshanna’s mother didn’t help her, and was even fooled by the simple deception? As if!

p> What’s more, the story in the first chapter and what I skimmed in the rest of the book felt … fake. Others who were there feel the same way and are raising questions about the veracity of the accounts in the book:

… the women believe that the discrepancies are too vast to call the book a memoir. They even question whether the stories Ms. Rodriguez tells about Afghan women — disturbing, heartbreaking tales of abuse — are real… [Link]

Another reason why I distrusted the author was because I had heard of this beauty school before, but in a different context. There had been a documentary called “The Beauty Academy of Kabul” about the same school, which was not founded by Ms. Rodriguez (as the press release for the book and most of the reviews claim), but instead had been taken over by her instead. The other women involved with the project are quite bitter about this:

The idea came from Mary MacMakin, an American who had lived in Afghanistan for more than 25 years, who was the subject of a March 2001 Vogue article. Ms. MacMakin, now 78, suggested to Terri Grauel, the stylist on the photo shoot, that learning hairdressing and makeup techniques would help Afghan women gain financial independence and self-esteem. Ms. Grauel enlisted the help of Ms. O’Connor, a beauty industry consultant, and together they rallied Vogue, Clairol, MAC Cosmetics and others, collecting mascaras, lipsticks, dyes and shampoos. Eventually, they hoped to take the program, which they called Beauty Without Borders, to women around the world. With donations, they erected a building at the Afghan Women’s Ministry…

… They say that, instead of being its savior, as she [Rodriguez] represents, she plotted to move the school from the Women’s Ministry to the house she shares with her Afghan/Uzbek husband, Sher (called Sam in the book). And, they said, she did it for personal gain. [Link]

p>Neither her publisher nor her agent seem too worried about any of this:

p>And the book is already an instant best-seller, with a film deal in the works:

The book has been widely praised, hitting No. 10 on the New York Times best-seller list this week and receiving a “six figure” deal from Columbia Pictures. [Link]

So read it if you wish, but if you find yourself as cranky as I was after just a few pages of the book, don’t saw I didn’t warn you.