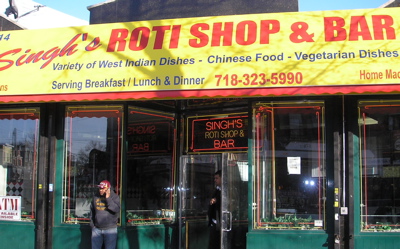 One of the great pleasures of following the Cricket World Cup this past month has been the chance to spend time with cricket fans and glimpse the global and diasporic affinities that simultaneously connect them and set them apart, in a metropolis like New York, from the mainstream culture of the city. Cricket is a niche sport even in immigrant-rich New York, since, after all, only a fraction of those immigrants come from cricket-playing countries. Yet the diversity of the cricket community, drawn as it is from all corners of the former British Empire, and the fact that all those places have a critical mass of expatriates or immigrants in New York, has produced in this World Cup season a kind of hyper-cosmopolitan sub-culture; one that, in its own way, illustrates the cross-hatching of differences and solidarities that makes life in the city complex and stimulating.

I’ve tried to capture some of that joyous complexity in a radio story that ran yesterday. The reporting (only a fraction of which made it into the piece, radio being like film a craft where most of your work ends up on the cutting room floor) led me to such arduous research environments as the Australian pub 8 Mile Creek, where expats of various nationalities were toasting the home side’s demolition of England with six-dollar bottles of Cooper’s Sparkling Ale. But it also gave me an introduction to the Indo-Caribbean community in Richmond Hill, Queens; and the revelation to my new-to-New-York eyes of the sheer size of that community, let alone its history and apparent present dynamism, will be the lasting memory of this World Cup in my personal experience. 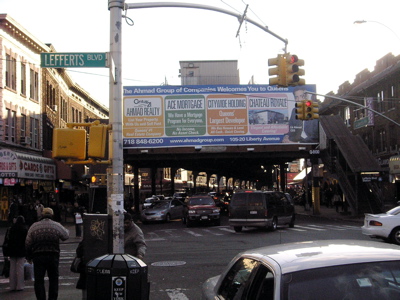 Occasional commenter “Farouk Engineer,” who took the photos in this post and has U.K. ties, commented to me that he’d never found a New York neighborhood that reminded him so vividly of London — particularly certain parts of South London — as this one. Of course the ethnic makeup and the cultural signifiers on display along Liberty Avenue, the main drag, have everything to do with this. The 15 blocks or so in either direction from the end of the elevated train (the Lefferts Blvd terminus of the A train, for you NYC-ers) are replete with shops and services that reflect the double-diaspora lives of people whose ancestors were taken not so long ago as indentured laborers from (mainly) Bihar and eastern U.P. to Trinidad and Guyana, and who themselves have formed a large colony here. The Indo-Guyanese in particular, who began migrating to the U.S. in the 1960s when politics in Guyana (with a documented assist from the C.I.A.) became factionalized on racial lines, remain one of the city’s fastest growing groups. The Hindu temples, masjids, halal butchers, sweet shops, music stores offering huge selections of Bollywood alongside soca and chutney music, sari emporia, vegetable markets, and obligatory outpost of the Patel Bros grocery empire indicate not only the vitality of this community but also the strong connections it retains with the cultural memory of the Desh. 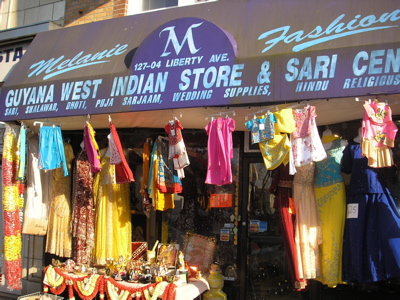 At the same time, Liberty Avenue is far, almost remote, and certainly many miles away from the stomping grounds of New York hipsters, machers, moneywallahs and mavens. Even “Farouk,” an inveterate urban explorer, hadn’t made it out there in a decade living here. Conversely, Indo-Caribbeans like Imran (named after Imran Khan, he told me) and Chris, two young Guyanese brothers in their 20s that I met on a rainy afternoon in the Kaieteur restaurant on Lefferts Blvd., told of a community that, whether due to the distance or underlying insularity or some combination of the two, sticks largely to itself. With generational comes attitudinal change, yes; Imran explained that he has Black friends, for instance, even if he knows he can’t bring them back to his parents’ house. But the overall social model at work here seems to be that of classic immigrant, nose to the grindstone accumulation, where “assimilation,” whatever that is, is more likely to occur not in Queens or even New York City, but rather in the suburbs where the next generation aspires to raise its kids. “We’ve got our whole lives mapped out,” Chris told me; he’s getting married soon to an Indo-Guyanese sister (“light skin, green eyes,” he pointed out proudly), they’re buying a Range Rover and they’ve pulled together funds for the down payment on a house in New Jersey.

That’s just a vignette, of course, one of many but each nothing more than a glimpse. I take from my first exposure to this particular component of the desi diaspora only impressions, ones that I hope to develop, complicate or dispel in the course of future projects and wandering. But chance encounters have their own merit and meaning, and these would not have happened were it not for the cricket, the common thread that gathered us in the bar, the roti shop, or for that matter the Ozzie pub back in Manhattan. Whether playing or watching, the essence of team sport is human connection, and between the running commentary that has taken place here (Anna’s happy novitiate, Vivek’s pleading for wickets, TajUK‘s recommendation of C.L.R. James’ Beyond A Boundary stand out in my mind) and the IRL conversations I’ve had in the viewing spots of New York, this World Cup, for all its bizarre and problematic news developments, has been a season of plenty.

And another thing: GO SRI LANKA!!!

73 thoughts on “The View from Liberty Avenue”