When I was little, I went to India for my Mamaji’s wedding. At that point, we still drank the water, although it was very the last time we did so. I got very sick and lost enough weight that my ribs were visible. In fact, I became so emaciated that I could tickle my bottom few ribs from the inside, much to the horror of my parents. To make things worse, it was hot in Amritsar that year, over 100 degrees, and we were in an old house without air conditioning.

Throughout it all, as the adored foreign child, I was coddled and comforted. It wasn’t that bad for me. Still, it gave me some compassion for those who have to drink water far worse, such as the 2 million children who die each year for want of proper water and sanitation.

The big policy debate over water privatization seems to have ground to a halt. In poor countries, governments do a lousy job of getting water to their people (maybe 30% of Indians have access to clean water), and while de facto privatization proceeds apace, formal privatization schemes seem to have done poorly enough to reduce earlier corporate enthusiasm.

Still, two of the more imaginative schemes I’ve seen in the past year have argued for extreme privatization, decentralizing the provision of clean water down to the sub-village, or even personal level.

For example, the Lifestraw is designed to give each person their own personal water purification system: 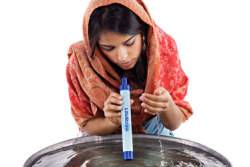 … a plastic tube with seven filters: graduated meshes with holes as fine as 6 microns (a human hair is 50 to 100 microns), followed by resin impregnated with iodine and another of activated carbon. It can be worn around the neck and lasts a year.

Lifestraw isn’t perfect, but it filters out at least 99.99 percent of many parasites and bacteria, the demons in most fatal cases of diarrhea. [Link]

The original Lifestraw was field tested amongst the earthquake refugees in Kashmir.

Although the idea is pretty cool, it has its detractors. Critics argue that there is no market for such a product – that at $3.50 (or possibly even $2), it is still multiple days work to pay for each person’s straw, and it still only lasts a year. They also argue that it doesn’t reduce the long distances people have to travel to get water, thus reducing its appeal, and that local water projects are more effective because of economies of scale [Link].

There there is Dean Kamen’s Slingshot project. Kamen is the inventor of the Segway, and his idea was to use cow dung (and other easily available fuels) to run a special high efficiency Stirling Engine which would produce electricity and clean water for sale:

Dean Kamen, the engineer who invented the Segway, has invented two new devices, each about the size of a washing machine, that can provide much-needed power and clean water in rural villages.

The water purifier makes 1,000 liters of clean water a day from any water source, even sewage. The power generator makes a kilowatt off of anything that burns.

The prototypes cost about $100,000 but eventually he hopes to mass produce them for about $1000 to $2000 which he will lease to local entrepreneurs, who will resell the power and water to local rural villagers in third world countries. The market potential is huge – about 1.1 billion people in the world don’t have access to clean drinking water, and another 1.6 billion don’t have electricity. [Link]

He’s working with Iqbal Qadir, founder of the Grameen Phone business, to try to create the entrepreneurial infrastructure for this to work:

The Slingshot works by taking in contaminated water … and separating out the clean water by vaporizing it. It then shoots the remaining sludge back out a plastic tube. Kamen thinks it could be paired with the power machine and run off the other machine’s waste heat.

Quadir is going to try and see if the machines can be produced economically by a factory in Bangladesh. If the numbers work out, not only does he think that distributing them in a decentralized fashion will be good business — he also thinks it will be good public policy. Instead of putting up a 500-megawatt power plant in a developing country, he argues, it would be much better to place 500,000 one-kilowatt power plants in villages all over the place, because then you would create 500,000 entrepreneurs.[Link]

I haven’t heard anything since the project was unveiled in February, and couldn’t find a website for it, so I hope the project hasn’t fallen by the wayside already.

Both of these approaches have the virtue of bypassing an ineffective and corrupt bureaucracy. Both also seem too expensive to work as purely for-profit ventures. Despite what advocates of the Bottom of the Pyramid approach argue, it’s very hard to make money off of the poorest of the poor since they have so little to spend. Even when it might make sense for the poor to invest in private water systems, they simply don’t have the cash to do so.

This is where a third approach comes in, one that emphasizes finance over technical innovation:

The WaterCredit Initiative has a more scaleable approach. Recognizing the creditworthiness of the poor, it has moved from one-time grants to providing small loans, successfully applying microfinance principles to cover the upfront costs of water systems. [Link]

This is more eclectic, and relies purely on available technology. It is not likely to be a full solution to the problem either – people can only invest in water where it is cheap enough to provide a short term economic benefit as opposed to a long term health benefit, which again leaves out the poorest of the poor. Still, it’s an important piece of the puzzle. The Water Credit Initiative has field projects in Bangladesh and India as well as Ethiopia, Honduras and Kenya.

This problem will not be solved overnight. Instead, this is a battle that can only be won drop by drop.

Related posts: World Water Day, A nation parched, Please Sir, Can I Have Some More Paani?