No, I am not referring to Sanjaya Malakar, because I wouldn’t want American Idol commentators to think that desi-Americans are monolithic in their support of him (we’re not), and I am not referring to me because well, desi never left my life. What I am getting at is the attempted resurgence of desi influences in mainstream American popular music, and surprisingly (or not so surprisingly depending on how you look at it) the current effort by producer extraordinaire Timbaland to bring desi back by featuring two desi-ish tracks on his latest release, Timbaland Presents Shock Value. The first of the two is “Bombay” featuring British-Asian songs 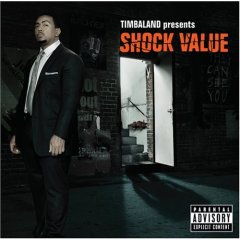 tress Amar, and the other “Come Around” with our girl M.I.A., which for some strange reason is only available in the U.S. as an import.

Like much of the album, both tracks are solid. Bombay is a straight up Hindi track, it features Amar’s vocal (rather than simply using it as a hook), its addictive, and makes good use of the “Bollywood of Yore” effect. The track has additional production by long-time Timbaland collaborator Jim Beanz, who recently released a couple of sanctioned remixes of two Nelly Furtado Tracks featuring Amar, Promiscuous Girl and Maneater, both of which are available for free download on Amar’s myspace page. Many of you might remember Amar for her hauntingly awesome vocal on the opening track Jaan of Talvin Singh’s groundbreaking compilation Anokha. On the heals of Anokha, she released a solo album, Outside, produced by Nitin Sawhney, but then seemingly fell off, until Beanz’s remix of Promiscuous started to make the rounds. For now anyway, it seems Amar may be the new Raje Shwari, the singer Timbaland and many others used for their Indian hooks a few years ago (Indian Flute, Bounce, Disco etc.), but hasn’t really been heard from since. I hope things work out better for Amar then they did for Raje.

As for the M.I.A. track, I don’t know, I can’t get enough. It’s got M.I.A.’s grimey rapping style, Timbaland’s typically solid production, and desi beats, incorporating and flipping the hook from a recent indi-pop hit “Let the Music Play.” The only thing wrong with this track is it isn’t on the American release.

Do I think Timbaland can bring desi back? I hope so. He’s gonna need help though, and by the lack of really good records from the desi diaspora over the past couple of years, it is going to be tough. For too long the desi music scene has relied upon British-Asian talent to bring the heat. I love British-Asian music, but its sound has gotten stagnant and it is time for desis on this side of the Atlantic to step up. From the word on the street and from what I’ve been hearing, I’m hopeful.

47 thoughts on “I’m Bringing Desi Back”