It’s not just Good Friday today, it’s also National Tartan Day so greetings and felicitations to all you national tarts out there. 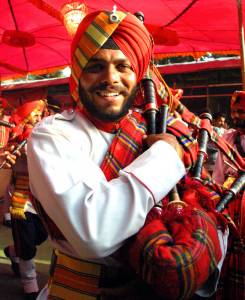 I’ve been waiting for this day all year, and have managed to store up a large number of desi angles for this story, most of which, oddly enough are Sikh. The bagpiper at right is easy enough to explain – bagpipes came with the British army all over the world. It’s just a great image, as is this.

But the connections go far deeper than just bagpipes. For example, there is actually a Sikh Laird in Scotland, Baron Sirdar Iqbal Singh, who commissioned his own family tartan:

Mr. Singh, 67, who lives in Little Castle, a turreted Elizabethan mansion in Lesmahagow, South Lanarkshire, and holds the title Lord of Butley Manor, Suffolk, said … “I remember thinking ‘I’m in Scotland, so why not have my own tartan?’”

The new plaid, which is on display at Paisley Museum, incorporates the Singh family colour of blue, yellow for peace, green to represent the landed gentry and red as a tribute to Gertrude, his Swiss wife. [Link]

Here is the plaid as registered with the Scottish Tartans Society.

p>The Baron is also a patron of the arts, having commissioned a series of paintings from the Singh Twins, two British sisters who combine Indian miniatures with western elements. 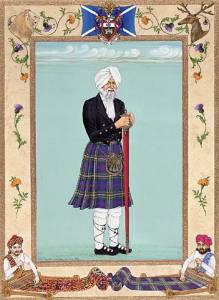 At right is their image of the Baron, and you can see two other images from the same series here and here. [You can also see some of their more modern efforts here and here.]

But there’s far more to being Scottish than just the Baron. For example, there are various versions of Punjabi Haggis!

By using an exotic blend of fresh tomatoes, green chilli and garam masala, the women of an Edinburgh community group believe their dish will appeal to Scots looking for a healthy alternative this Burns Nightâ€¦ They hit upon the idea of curried haggis while trying to come up with ways of making the traditionally high-fat Sikh diet healthier. [Link]

How do the Scots feel about all of this masala fusion? Well, I can’t speak directly to their opinions on haggis pakora, but surprisingly enough for a group that is trying to assert its separate identity from that of England, Scots don’t feel that you have to be white to be Scottish:

That said, they’re not equally welcoming to all desis. They are even more negative towards Muslims than they are towards the English, although a majority felt that there should be a law banning discrimination against both!

So just remember, for today at least, if it’s not Scottish it’s ….

p.s. are these guys the next Tigerstyle or what? [I think this link came courtesy of Fuerza Dulce but I've forgotten now]

24 thoughts on “Tartan and Turban”