Alright, macacas. We don’t want you to get the wrong idea. It’s only because we’ve all been crazy busy lately that we haven’t gotten to this one yet. We certainly don’t want you to think that we here at the Mutiny consider ourselves too high-brow(n) to address the strange case of Dr. Sandeep Kapoor, a.k.a. the “meth doctor” who has found himself in the limelight due to his involvement in the now-ended life of Anna Nicole Smith. 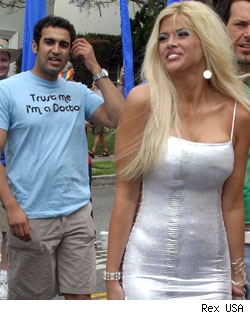 Question One: Is that T-shirt for real, or is it Photoshopped? Either way it’s a remarkable image. Almost as remarkable as the image the gossip sites had of the brother sans shirt, apparently launching into woozy canoodle with Ms. Smith on a couch in a club before some other sycophant shoves a hand on the camera lens. Almost as remarkable as that of the brother astride a West Hollywood Gay Pride Parade “float” — actually a black Saab convertible — gazing fondly down at Ms. Smith while she — oh, just click the link. (I have absolutely no idea whether it’s SFW or NSFW, by the way. I can’t gauge these things anymore.)

One of my Sepia colleagues commented to me that the brewing controversy over Dr. Kapoor, who is now under investigation by the California medical board for his alleged role in supplying Ms. Smith with the alleged pharmaceutical products that are alleged to have contributed to her demise (I think we’re safe with that phrasing), is actually good for the race, in that no one has commented on Kapoor’s ethnicity, leaving his incompetence and general gross-ness to speak for itself without racial qualifiers — he is being judged, if you will, not on the color of his skin but on the content of his character. Well, my co-Mutineer didn’t actually phrase it that way; I’m embellishing, but it’s still his basic point. Which means: Yay! Desis are now so normalized into the field of medicine that they are expected to be insane, incompetent, quacks at no greater or lesser rate than found in the general medical population.

The gossip sites also inform us (caution: clothed but scary picture) that Dr. Kapoor advertised at some point for a position (chick pea, are you listening?) in which he describes one of his practice’s specialties as Entertainment Medicine. This is, apparently, a hitherto-unknown field. He also does travel immunizations and (ahem) “several national and international clinical pharmaceutical trials.” I don’t know about Entertainment Medicine, but when it comes to Medicine Entertainment, this brother’s gotta be a shoo-in for the Oscar.