[This will be my last post of Indo-African material, and I wanted to end on a note of cultural solidarity. Thanks again for accompanying me on my trip to Kenya.]

A few weeks ago, Amardeep wrote a nice report from a conference about Indo-African writers:

Desai argues that there were some members of the Asian community Â— especially artists, playwrights, and poets Â— who were trying to envision a sense of shared culture with their black African neighbors.

On that note, I thought I would share the work of my friend Sharlene Khan, a South African artist I met in 2004. She was born in Durban to Muslim and Christian parents (she is Christian) and lives now in Johannesburg, having collected two masters degrees in art, despite her deep antipathy toward all things institutional and official, and done residencies in Cairo and the south of France — like any good artist, trying to avoid joining the work force.

Indian painting has become very popular (and lucrative) in the global art market these days, with post-modern, post-cubist, semi-abstract renderings of Hindu deities and Indian village scenes being all the rage — the proteges and imitators of MF Husain. But Sharlene’s work is none of that.

Her themes are African, her sensibility humanist. One of her series concerns the plight of laborers and street musicians in Durban. She also did an installation based on the little tents that itinerant barbers, often immigrants from other parts of Africa, set up on the sidewalks of South African cities. She has painted murals like Diego Rivera and designed clothing for a fashion show, painting the fabric and inscribing it with text.

A good phrase to describe her stance is the title of the painting above: “It Started Off as Them and Ended Up as Me.”She once emailed me about her disdain for the term Â“diaspora,Â” since the notion behind it (a people outside their homeland) has been a political issue in South Africa: Â“”It chiefly recognises similarities at the expense of equally important localised differences. I don’t really consider myself as part of such a diaspora, I am a South African Indian who is very located in this specific country at this specific juncture in time. And while I realise that the sense of ‘Indianness’ is probably a valid one among many migrant communities, in South Africa it was promoted by the apartheid government to ensure that Indians in this country were made to feel like outsiders. Indians have been in SAfrica since the 1820′s.”Â”

Her work takes up themes of alienation and longing, the degradation of unemployment, and the simple human joys of family. Her realism is deeply sympathetic, which is a rare trait (it’s also the hallmark of the very best photojournalism, which is one reason I admire it).

So here is an African artist of Indian descent, painting African themes that touch on universal human experiences. But don’t call it diasporic. 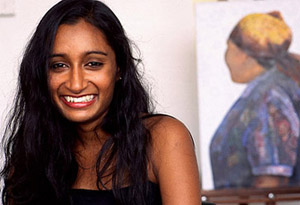 A Friend Loves at All Times, but a Brother is Born in Adversity (2002)

29 thoughts on “Sharlene Khan: “It Started Off as Them and Ended Up as Me””