While New Yorkers are known for their displays of self-flagellation, it’s usually a metaphorical exercise, one driven by old school Catholic or Jewish guilt. However, over on 3QD, Abbas Raza has some surprising photographs of Ashura / Moharram being commemorated right in the middle of Park Avenue. Ashura is marked by both Shia and Sunni, although for different reasons. For the Shia:

This day is anniversary of the battle of Karbala which resulted in martyrdom of Husayn ibn Ali, the grandson of Prophet Mohammad, by the army of Umayyad caliph,Yazid I. [Link]

All of Husain’s family was massacred in front of his eyes, even his six-month old son … The followers of Ali (the Shia) said to themselves that they would never allow this horrific event to be forgotten, and that they would mourn Husain and his family’s murder forever, and for the last thirteen hundred years, they have lived up to this promise every year. This mourning has given rise to ritualistic displays of grief, which include flagellating oneself with one’s hands, with chains, with knives, etc. [Link] 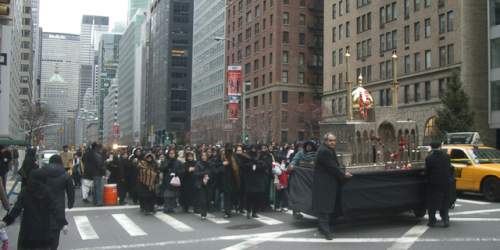 In front, you can see a painstakingly recreated model of the tomb of Husain…. It is a testament to the tolerance of American society that … it allows (and observes with curiosity) such displays of foreign sentiment… The procession is made up of Shias of various nationalities, with the largest contingents being from Pakistan and Iran. [Link]

I’m a native New Yorker, and I never dreamed that there was an Ashura procession in the center of the Upper East Side. It’s worth looking at Raza’s entire post — it’s a long article, with multiple photos including some of the self-flagellation.

22 thoughts on “Self flagellation on Park Ave”