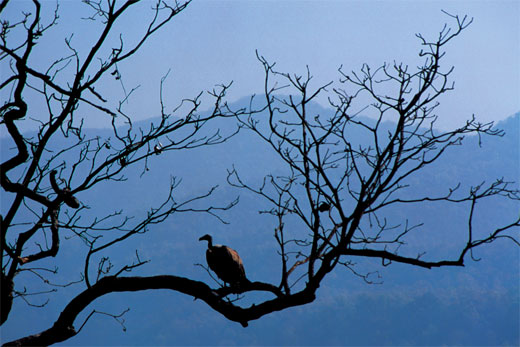 I’ve had a warm feeling toward vultures, buzzards and other scavenger birds since the time I attended a wedding in Burkina Faso, the arid, land-locked West African country, back in the early 1990s, and looked up to see clusters of big, bad-lookin’ buzzards hanging around on trees, waiting for the event to be over so they could swoop in for the remnants of the dozen or so sheep that had been slaughtered for the occasion. It was one of those “hey, what’s up?” moments humans can have with animals, when you realize that we’re all in this together, that each creature serves its function, and that the social and cultural practices of one species have significant effects on the well-being of others. I want to say it “humanized” the buzzards for me, which obviously isn’t the right word, but it demystified them and made me appreciate them. Nuff respect to the scavenger birds.

Today tipster Sakshi brings to our attention a fascinating article from Smithsonian magazine on vultures in the subcontinent, which not only offers an interesting glimpse into the lives of these birds but, more importantly, shows how closely we and they — and other species — lead interwoven lives and how fragile that balance can be. It turns out that scientists, picking up on the observations of cattle herders and others in the field, have noticed a substantial decline in the long-billed vulture population in the subcontinent for some years. The disappearance of the lead scavenger has resulted in the accumulation of un-scavenged cattle corpses as well as the growth of packs of feral dogs, in ways that you can read about in the article. It has also placed a new burden on secondary scavenger birds that used to only come in after the larger, more powerful vultures. Those birds in turn have become vulnerable to whatever it is that has decimated the vultures:

… across the subcontinent all three species of Gyps vultures are disappearing. Dead livestock lie uneaten and rotting. These carcasses are fueling a population boom in feral dogs and defeating the government’s efforts to combat rabies. Vultures have become so rare that the Parsi in Mumbai have resorted to placing solar reflectors atop the Towers of Silence to hasten the decomposition of bodies. International conservation groups now advocate the capture of long-billed, white-backed and slender-billed vultures for conservation breeding.

So what’s the cause? After initially speculating it was some kind of virus, scientists now have strong proof that it’s a particular medication that herders give cattle that is toxic to the vultures. This brings into the story the Indian pharmaceutical industry and its history of reverse-engineering cheap drugs, which arguably has done a lot to save human lives but has also resulted in a proliferation of drugs on the market without necessarily sufficient regulation or understanding of appropriate use. The chain of effects goes on:

Public health officials say it’s likely that India’s rat population is growing too, sharing the bounty of abandoned carcasses with feral dogs, and raising the probability of outbreaks of bubonic plague and other rodent-transmitted human diseases. Livestock diseases may increase too. Vultures are resistant to anthrax, brucellosis and other livestock diseases, and helped control them by consuming contaminated flesh, thus removing reservoirs of infectious organisms. Some municipalities are now resorting to burying or burning carcasses, expending precious land, firewood and fossil fuels to replace what Rahmani calls “the beautiful system nature gave us.”

In all, this is a powerful story of interdependence and one that, just possibly, might have a happy ending, as the governments of India, Pakistan and Nepal have grown aware of the problem and taken remedial action. Read the article for that story as well as a rich perspective on the interconnectedness of all things, one that might, at a minimum, help us step back from some of the ridiculous disputes over trivial matters that we humans, including those of us who hang out at this site, sometimes so enjoy wallowing in. There’s also a nice sidebar interview with the article’s writer, Susan McGrath:

Well, I knew that my trip to India was going to be different than most people’s trips to India. All my friends were saying, “Oh you’re so lucky! The crafts! The clothing! The wildlife!” And I spent half my time in India in carcass dumps.

Glad you did, Ms. McGrath. And to the vultures: keep ya ugly heads up, my avian brothers and sisters, stay strong!

22 thoughts on “Vultures At Risk”