Arnold Schwartzenegger has a new opponent, and this time he’s battling a desi [Thanks Chick Pea!]. The governator’s latest adversary is the head of the the California Medical Association, Dr. Anmol Mahal. 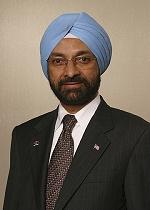 The Fremont, Calif., gastroenterologist admired Schwarzenegger’s goals–coverage for all of the state’s 36 million residents and improving health care for kids. “It’s in some ways very visionary,” Mahal said later. But Mahal’s admiration soured when Schwarzenegger revealed that his plan would force doctors to give up 2 percent of their gross incomes to help fund coverage. “We are very discouraged and disappointed,” Mahal complained. “We had no warning.” [Link]

It is strange enough for me to see two of the highest profile Republican governors in the country pick up Hillary Clinton’s banner of universal healthcare, but stranger still for me to see a turbanned face (wearing a turban almost the same shade of blue that Manmohan Singh wears) staring back at me from the pages of the MSNBC article on the subject.

The racial aspect of this is striking because this is a plan designed, in part, to cover the health expenses of illegal aliens. This is a complete about face from former Republican Governor Pete Wilson’s strategy of demonizing illegal aliens. Having a desi doctor as the face of the opposition adds another twist, framing this as a debate between wealthy legal immigrants and poor illegal ones. That makes the politics more interesting, but also more complex.

The crux of the doctors’ disagreement with the plan is the way in which it will be funded:

… nearly 30 percent of the plan’s costs [will be covered] by levying a $3.5 billion “coverage dividend” on doctors’ (and hospitals’) gross revenues. “Why not tax teachers to provide money for better schools?” complains Dr. Samuel Fink, a Los Angeles internist. [Link]

Some medical practices would suffer more than others, doctors complain. Assessed on gross revenues rather than net income, the 2 percent fee hits doctors with high overheads harder, including oncologists, pediatricians and general practitioners–whose overhead costs may amount to 50 to 60 percent of their revenues. [Link]

p>Here is how the costs break down across various economics groups:

The language of fees is important for two reasons. Firstly, the Governor doesn’t want to be seen as raising taxes:

Schwarzenegger has steadfastly refused to call them taxes, but some of his own allies in the business and fiscal conservative communities say that’s exactly what they are…. some accuse the governor of being hypocritical, noting that Schwarzenegger criticized his Democratic opponent during the 2006 campaign for supporting a plan that would put billions of dollars in new costs on businesses to pay for health care [Link]

Secondly, there is a constitutional issue involved here:

The tax-vs.-fee debate is more than a question of semantics: It could decide the fate of the proposal. Tax increases require a two-thirds vote in the Legislature, while fees need only a majority. The larger threshold would give Republicans virtual veto power over critical pieces of the governor’s health plan. [Link]

p>The CMA is girding their loins for a hard fight on these issues, hopeful that the administration will yield ground:

Negotiations have only just started. Dr. Mahal promises that the CMA will lobby hard to cut the provision that docs help pay for the plan. Schwarzenegger has signaled that almost everything is open for discussion–”I look forward to everyone having those debates,” he said on the day he unveiled his plan. [Link]

222 thoughts on “Turban vs. Terminator”