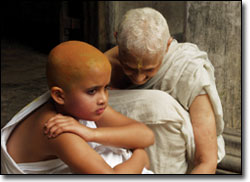 The big news in Oscarland this morning (with a Desi Angle of course) was the inclusion of Deepa Mehta’s Water amongst the nominees for “Best Foreign Language Film.” According to Canada.com, Mehta said that she was in a state of shock over learning that her film had been nominated. Frankly, so was I. Don’t get me wrong, I am happy for Mehta. She clearly put a lot of hard work and time into the film. And it is clearly something she is (and should be) proud of. I just don’t think the movie was that good. As I mentioned in my quickie review here, I thought the film was a good timepass, but in the end I thought it lacked the authenticity a period film like Water should really have.

Mehta’s third film in her trilogy of elements is set in 1938 India and revolves around Chuyia, an 8-year-old Hindu widow – brilliantly portrayed by Sarala – sent to leave her family behind and live in an ashram with other widows. The movie follows Chuyia and focuses on her interactions with Shakuntala (Seema Biswas), the de facto caretaker of the widows, and Kalyani (Lisa Ray), a widow who wants to start a new life and relationship with Narayan (John Abraham), a Gandhian. While Biswas and Sarala both give really good performances, I thought the third facet of the plot, that of the relationship between Ray and Abraham, along with the misleading sets a definite contributor to the mediocrity of the film.

Water will be competing for the Oscar against Denmark’s After the Wedding, Algeria’s Days of Glory, Germany’s The Lives of Others and Mexico’s Pan’s Labyrinth. I did find it noteworthy that Water is the first non-French film from Canada to be up for a best foreign language film (link). I think that is impressive initself: think about it, Canada submitting a Hindi language film as its submission for Best Foreign Language Film. I think that is amazing.

Given that many of the reviews of Water published in the mainstream media are quite positive of the film, clearly my impression of the film is not that of the majority. Nevertheless, I am in agreement with the reviewer who wrote that the many overly positive reviews are a reflection of people confusing an honorable message with a good movie. I do wish Mehta the best at the Oscars though.

The Academy Awards air February 25 at 8 PM on ABC.

Related posts: Fun With The Reviewers: Deepa Mehta’s Water, earth, fire, WATER, Water Is Finally Here, Is Deepa Mehta Back in the Game?

54 thoughts on “They Drank the Water”