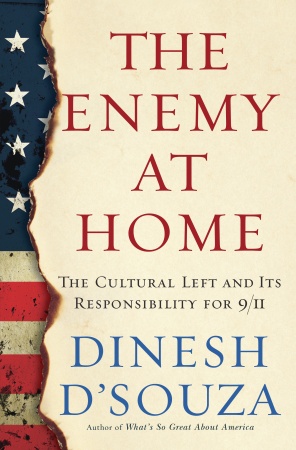 “The worst nonfiction book about terrorism published by a major house since 9/11″ is what Warren Bass, senior books editor at the Washington Post (and, the byline notes, a former staff member of the 9/11 Commission), calls the latest from desi Talking Android nonpareil Dinesh D’Souza. The book is called THE ENEMY AT HOME: The Cultural Left and Its Responsibility for 9/11, a title that begs little further explication. Indeed, Bass points out at the end of a sharp review that’s less blustering and more cutting than that of Alan Wolfe in the New York Times, the whole exercise of D’Souza’s book seems so plainly intended to cause a kerfuffle in the blogosphere that I feel tawdry even bringing it up here, despite the Desi Angle (TM). As Bass notes:

Either D’Souza is blaming liberals for 9/11 because he truly believes that they’re culpable, or he’s blaming liberals for 9/11 because he’s cynically calculating that an incendiary polemic will sell books. I just don’t know which is scarier. One has to wonder why his publisher, agent, editors and publicists went along for the ride, and it’s hard not to conclude that they thought the thing would cause a cable-news and blogosphere sensation that would spike sales — a ruckus triggered not despite the book’s silliness but because of it. This sort of scam has worked before (think of Christopher Hitchens’s gleeful broadside against Mother Teresa or the calculated slurs of Ann Coulter), but rarely has the gap between the seriousness of the issues and the quality of the book yawned as wide. This time, let’s just not bother with the flap; this dim, dishonorable book isn’t worth it.

And perhaps, indeed, it isn’t. Still, as the rituals of the publishing biz dictate, Brother D’Souza has been getting his publicity on since the book’s release last week. Yesterday he had an op-ed in the San Francisco Chronicle that begins with a piece of logical reasoning that might have done Descartes proud:

The Pelosi Democrats sometimes appear to be just as eager as Osama bin Laden for President Bush to lose his war on terror. Why do I say this? Because if the Pelosi Democrats were seeking Bush’s success, then their rhetoric and actions now and over the past three years are pretty much incomprehensible. By contrast, if you presume that they want Bush’s war on terror to fail, then their words and behavior make perfect sense.

The brother then moves from logic to anthropology, with this behavioral note on that strange specimen, “the leftist”:

First there is the ritual qualification. “I’m no fan of bin Laden” or “Bin Laden is not a very nice guy.” Having gotten these hedges out of the way, the leftist proceeds to lambaste Bush and the conservatives with uncontrolled ferocity.

We proceed to linguistics:

This is typical Washington doubletalk. What [White House spokesperson] Conant cannot say is that Pelosi no more wants Bush to succeed in Iraq than bin Laden does. Whether it realizes this or not, the Bush administration is facing a kind of liberal-Islamic alliance: a sympathetic relationship that leading leftists in America have with Islamic radicals around the world.

Of course, when D’Souza says “sympathetic,” he means they hate each other:

I’m not suggesting the two groups actually like each other. Actually, they despise each other. Leftists like Pelosi, Barney Frank and Michael Moore despise bin Laden and his fellow radicals because they are religious fundamentalists who want to impose Islamic holy law. That means goodbye to women’s rights and gay rights and, in all candor, goodbye to people like Pelosi, Frank and Moore.

In all candor. But does that mean that Michael Moore is gay, or a woman? Perhaps a lesbian? Moving on:

By the same token, Islamic radicals like bin Laden detest the American left because, as they see it, the left is the party of atheism, family breakdown and cultural depravity. The left is in the vanguard of imposing secularism, no-fault divorce, gay marriage and libertine social values not only in America but also abroad.

Forestalling the great conflagration between The Left and bin Laden (and one wonders why? surely this Armageddon would cleanse the world of both horrors) is one courageous little Dutch girl with her finger in the dyke:

Here is the battlefield where The Left and Bush are duking it out (and believe me, I’m not skipping any passages here; this is the brother’s logic in its full step-by-step exposition):

So it all comes down to sex, although, D’Souza admits on the Colbert Report, “I’m not an expert on the homosexual lifestyle.” This moments after putting forward “gay marriage” and “people eating maggots” as the image of America that TV beams to the world, even though, as we know, true Americans neither eat maggots nor do the gay.

By now you can see my brother’s logic come together, so I shall not insult your intelligence with further exegesis. You can read the Chronicle item or watch the Colbert clips (part 1; part 2) for additional gems, for instance when D’Souza, encouraged by Colbert, blames 9/11 not just on Bill Clinton and Jimmy Carter, but also — “indirectly, yes” — Franklin D. Roosevelt.

In his haste to rush to market his original and timely analysis, Bro D’Souza apparently didn’t bother to fact-check, Bass points out:

D’Souza … has no particular expertise on terrorism, which may explain why he writes twice that there are U.S. troops in Mecca (someone should probably alert Bob Gates) or why he thinks that President Reagan’s 1986 airstrikes on Libya “convinced Qadafi to retire from the terrorism trade,” despite the bombing of Pan Am 103 by Libyan agents two years later.

In the Chronicle piece, D’Souza also refers to Robert Fisk as an “American leftist,” which was news to me.

All in all, a command performance by a gentleman who remains, for all his ridiculousness, the most prominent desi in U.S. political debate, and certainly the one who’s made the most money peddling his ideas. Some of you might agree with Bass, that it’s a waste of space even talking about him. I don’t. The brother might be an embarrassing buffoon, but we can’t wish him away.

146 thoughts on “Our Foremost Political Philosopher”