I could barely restrain my glee yesterday when I switched on the TV during the day, and found myself witnessing the 15th Asian Games in Doha. Why, you may wonder? Because I found myself watching (wait for it)…international, competitive, kabaddi. 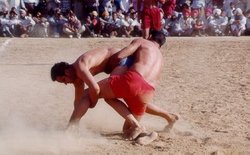 One of the more eclectic sports, and for people such as myself who know nothing about the game other than its featuring scantily-clad, oiled-up men chanting, kabbadi is played by two seven-player teams, which take turns raiding each other’s side of the court. One scores points either touching an opposing player and returning to your own side, or by an opposing team managing to prevent a raider from returning to his side.

I mean, I sort of know what it’s all about, but my experience with kabaddi was limited to having heard about it, seen the occasional match while channel-surfing at 4:00 a.m., and once or twice, driving past Clifton Beach in Karachi on a Sunday evening and seeing what I was informed was a match in progress. I certainly had no idea that kabaddi had hit an international level, and even less aware was I that Japan and Iran are also into the sport. I also had no idea that (a) this existed, and (b) that there were some hotties involved in the game: 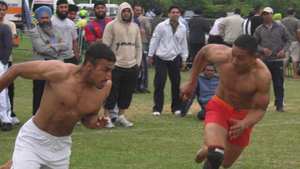 Am I just clueless about this, or did I somehow miss the (re?)surgence of kabaddi? Best of all though, I can’t help but feel somewhat vindicated by this image. On behalf of all brown men everywhere who enjoy getting oiled up and tussling with other oiled-up men in skimpy clothing, I say carry on my brothers! We shall overcome! 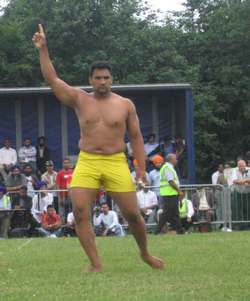 48 thoughts on “Rasslin’, the way the it was meant to be”