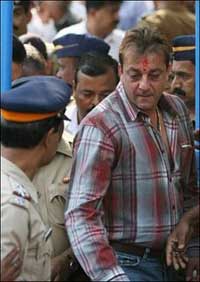 Bollywood actor Sanjay Dutt (star of the Munnabhai movies) has been acquitted on the terrorism charge that’s been on his head since 1993. The judge did find him guilty of illegal possession of arms, but it appears that charge is much less of a concern: though he may still do years of prison time, according to the New York Times, Dutt’s family and friends are celebrating.

Some background on the case is available at Wikipedia:

Mumbai was engulfed in riots as the aftermath of the destruction of the Babri Masjid complex in Ayodhya in December 1992. The resulting riots claimed hundreds of lives and it is during this time that Sanjay Dutt claims to have asked his under world friends to provide him with a fire arm for protection. He however had not conveyed to police any threats to his life.

Admittedly, the Wikipedia article is a bit slanted towards Dutt here, as it presumes that Dutt’s purpose in buying a weapon was self-defense. But the problem with this interpretation is Dutt’s supplier, Abu Salem, a notorious terrorist seen as one of the key organizers of the terrible 1993 blasts in Bombay. While it’s fair to imagine that a half-Muslim actor might want protection following some nasty communal riots (December 1992-January 1993), it’s also fair to speculate that he knew Abu Salem was up to something unsavory by the spring of 2003. Even if Sanjay Dutt wasn’t actively involved in the bombings that took place in March of 1993, isn’t it possible he knew something about the plans given his association with Abu Salem?

I guess I lean towards Dutt a bit in this case. While I do find Abu Salem’s involvement disturbing, it’s hard to imagine that Dutt would have been actively involved in terrorism given his famous parents and his status as an actor. That said, if this were the U.S., and Sanjay Dutt had bought an AK-56 rifle from, say, Mohammed Atta, he would probably be permanently locked up in Guantanamo Bay. (Sometimes, the Indian legal system seems more rational than the current American one.)

Dutt served 18 months in jail immediately following his arrest, but within a few years was back and more popular than ever in Bollywood. The 2000s have been the peak of his career, with the two superhit Munnabhai movies. As I recall from the comments to one of my earlier posts on Lage Rago Munnabhai, some people at least have been aware of the irony of an actor in a movie about “Gandhi-giri” being found guilty of possessing an assault rifle. Well, at least he has one thing in common with the Mahatma — they both did lots of jail time.