Each Friday NPR’s Morning Edition features a StoryCorp Project interview. You may recall that I had previously blogged about an interview between a Sri Lankan American husband and wife. This morning’s interview featured a really cute story (only ~1 minute long) from a Sri Lankan woman who came to the United States in 1969. I recommend that you guys stop reading this post right now and listen to this clip first. For those of you too lazy to follow my recommendation I will give you the lead in below:

When Juliet Jegasothy came to the United States from Sri Lanka, she had already heard many stories about what life was like in America.

“We came to America in 1969, we were just newly married, and we came to Brooklyn, New York.” Jegasothy recently told her friend Sheena Jacob.

“I was so terrified to even open the door, because I had heard all these horror stories about crooks, and gangsters, and guns, in New York.“

p>I realize that I am jumping the gun and that Halloween isn’t until next Tuesday. However, most of you have probably been invited to some Halloween party this weekend (unlike some grad student I know who will be writing alone in his apartment dressed up like a blogger) and if you are a procrastinating slacker like me you could really use some costume advice STAT! After the jump I will provide you with some last minute ideas.

p>WARNING There is some scary sh*t past this point. 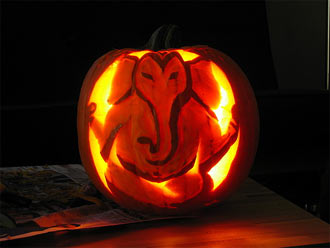 p> Have you considered a desi-themed costume? What about Ganesh?:

Of course, Kali costumes are far and away the crowd favorite:

What about something more mutinous?

Most of these images were found courtesy of Flickr. So now it is your turn. Do any of you have any desi-related Halloween stories or costume pictures you’d like to share?