Back in the day when your humble servant was but a wee lad, we lived in France with one extended family to visit in the United States and another in India. That made for a lot of intercontinental travel, and since we didn’t have much money, we tended to go for long stays and travel by the cheapest means possible. The result is that I achieved a lot of early experience flying on disreputable airlines. In 1973, my dad took me for my first visit back to India; Iraqi Airways was our carrier. Twelve years later, I traveled solo on Syrian Airlines. There were some sinister looking Syrian security personnel watching us as we boarded in Paris and aboard the plane. But that probably helped keep us safe. At the layover in Damascus airport I remember big empty halls and lots of pictures of Hafez al-Assad.

But the single worst passenger experience was circa 1978, on Aeroflot. Flying from Paris to Moscow was no big deal; a relatively modern aircraft, on time, quick. There was enough business, cultural and diplomatic activity between the Soviet Union and Western Europe to warrant decent service. The Moscow-Delhi leg was another story. Almost everyone on the plane was someone trying to get to India cheap — mainly backpackers and families like us — and our comfort and care were not major corporate priorities. That Ilyushin was one loud-ass aircraft and falling apart inside and out. The food was unspeakable, but the flight was long, and people ate. Mass nausea ensued, and long lines began to form in the aisles toward the rear of the plane. As I recall, we were sitting back there and the aromas were quickly getting nasty.

Amid this scene, the air hostesses, who had until then treated us with glacial Slavic/Soviet neglect, suddenly ran down the aisles toward the back, agitation on their faces, and yelled to the people in line:

Ah, travel tales. Well, this joyous experience is what comes to my mind as I learn from the BBC, through a kind tipster on the News tab, that

An Indian-born businessman has purchased a private central European airline for an undisclosed amount.

Harjinder Singh Sidhu, who lives in UK and is a British passport holder, bought Air Slovakia, a small privately owned airline based in the capital, Bratislava last week, it has emerged.

His son, Riqbal ‘Rocky’ Singh, told the BBC News website that his father wants to transform the 60-employee Air Slovakia into a “Punjabi experience”. 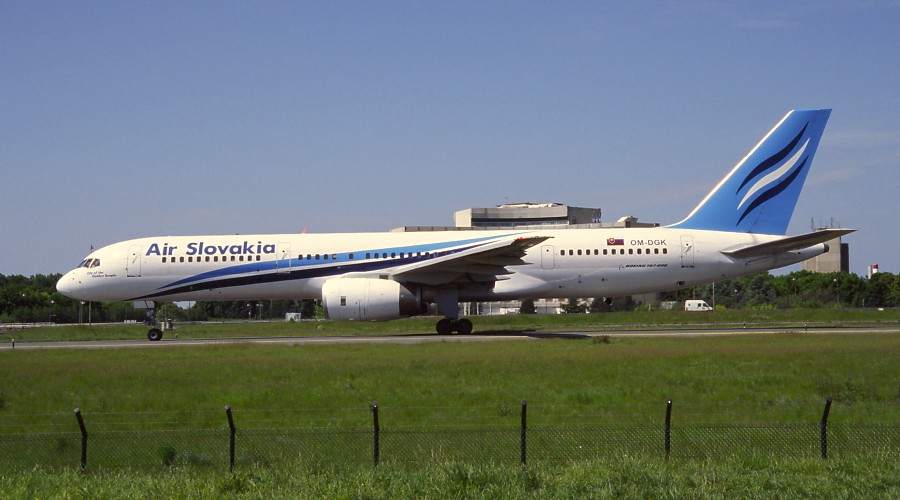 Air Slovakia, which boasts three aircraft and 60 employees, has to have the weirdest route map in the world. According to the airline website, itself an interesting specimen of the genre, it operates flights between Bratislava, the Slovakian capital, and Birmingham, Milan, Tel Aviv, Cyprus, and… Amritsar. The BBC article suggests that there are plans to serve various Western European airports, including Stansted. But make no mistake, Air Slovakia is now a Punjabi airline.

“The bulk of our passengers are from Punjab and Punjabis from Europe. So we want to brand Air Slovakia as an airline with Punjabi ambience and flavour. Our stewards, airhostesses will be from Punjab as also the in-flight food,” Mr Singh, who is a director at the airline, said.

But what does Mr Singh say about an airline catering to passengers from Punjab still being named Air Slovakia?

“The airline will have a second name of sorts when it comes to India. All tickets to and from India will be sold under a Punjabi name which will also be branded on the planes,” Mr Singh said.

In other words, if you’re in India and looking for that cheap fare to the UK, beware. Some snazzy sounding new airline offering unbeatable prices out of Amritsar might turn out to be this:

Airline passenger websites do not report a very happy experience of travelling on Air Slovakia so far.

“My advice would be not to travel on Air Slovakia, very poor service, very cramped, not enough leg room, staff rude, food poor.. Air Slovakia leave you stranded and offer you no help,” complains a passenger on one website.

I’d also recommend checking the aircraft registration papers and security records. No knock on the Slovakians, but several Eastern European countries have become known as easy places to get aircraft papers with minimal or no inspection.

But Mr. Singh promises that the old days are gone for good. He says service under the new all-Punjabi concept has already improved. (Needless to say, if any Mutineers have experienced this airline, we’d love to hear from you.) And the website is even doing its own job promoting India as a destination:

India will sideswipe you with its size, clamour and diversity – but if you enjoy delving into convoluted cosmologies and thrive on sensual overload, then it is one of the most intricate and rewarding dramas unfolding on earth, and you’ll quickly develop an abiding passion for it.

Nothing in the country is ever quite predictable; the only thing to expect is the unexpected, which comes in many forms and will always want to sit next to you. India is a litmus test for many travellers – some are only too happy to leave, while others stay for a lifetime.

Well, when I fly, I don’t like my litmus test to come and sit next to me — been there, done that, and I know it’s nasty. But still, let’s hand it to Mr. Singh for his bold, counter-intuitive business play. The brother seems optimistic about his chances of making a buck:

What is also unclear is how Air Slovakia was faring financially when the Singhs took it over.

“Let us say it is about to enter puberty. It needs some tender love and care,” says Mr Singh with a flourish.

117 thoughts on “Butter Chicken in Bratislava”