Although Vikram Seth has been out of the closet as bisexual for some time now, I had not been aware of his sexual orientation until he gave a lengthy interview to Outlook India on the subject. His more visible profile on the topic of his sexuality is related to his public support for the anti-Section 377 movement, the movement for the decriminalization of homosexuality in India. 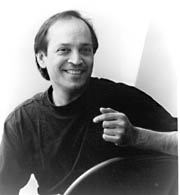 I’m not sure I quite understand what bisexual means?

What do you mean you don’t understand? Supposing I have a physical attraction at some time or in a certain place to a particular woman, and another time to a particular man …I suppose if you don’t like the word, you could say I am gay and straight.

But if you can be straight, and life is so difficult as a gay, isn’t it simpler to just be straight?

Of course not. You have your feelings. You can’t just suppress or contort your feelings, either your emotional or sexual feelings. And why on earth should you, just to appease someone else’s unthought-through prejudices. [Link]

p>Ah yes, such a desi question. But beta, if you are attracted to vomen, then vhy do you need to be the gay? She follows that little gem up by asking “This is something that people often snigger about: has boarding school anything to do with you being gay?” which was the icing on the cliche cake.

p>While I cringed to read her asking these questions, I was still glad she did. Even if she knows better, I imagine these are questions that your average person on the street is thinking of, so it’s far better to give Seth a chance to respond than to leave them unsaid.

There have been about nine convictions in the 125 years since this section was included in the IPC. Why then is it so important to remove it?

For several reasons. First, because it is used as a source of harassment of people… The other reason is that a law like this casts a shadow of illegality on the personal lives of a whole lot of people. They can’t live openly and with dignity. Because even their families and well-wishers tend to use the existence of the law to justify their prejudices…. That’s the crucial point.

… you ask me whether this directly affected me. Yes. When I realised that I had feelings for men as well as women, at first I was worried and frightened, and there was a certain amount of Who am I? Am I a criminal? and so on. It took me a long time to come to terms with myself. [Link]

p>It’s worth reading the whole thing, as it covers a fair amount of ground, including his relationship to his family, how they dealt with his coming out, and his romantic history. The one thing she didn’t ask, unfortunately, was how his perspective informs his writing.

p>Here’s an early poem, one of the few where his sexuality shows up directly. It’s called “Dubious”:

Some men like Jack and some like Jill
I’m glad I like them both but still
I wonder if this freewheeling
Really is an enlightened thing,
Or is its greater scope a sign
Of deviance from some party line?
In the strict ranks of Gay and Straight
What is my status: Stray? Or Great? [Link]

Amitava Kumar’s take on the interview is less charitable [Thanks Manish]:

You called Sheela Reddy’s interview ‘smutty’ and ‘shallow’. What do mean when you refer to her penchant for such things?

Sheela Reddy is the editor who compiles the Bibliophile section of Outlook magazine. In my opinion, the tone in that column is semi-literate and cynical–very, very different from columns like “Short Cuts” in the London Review of Books and “NB” in the Times Literary Supplement. Given that history, “shallow” is a kind word. I used the word “smutty” for the Vikram Seth review because I caught a strong sense of prurience in her questions. [Link]

65 thoughts on “A suitable boy or girl”