For about the past year I have been enjoying the sounds of the L.A. based band Goldspot. In 2005 NPR classified their release as one of “The Best CDs You Didn’t Hear This Year.” Here in Los Angeles they actually get radio play fairly often on KCRW (unrepentant and pretentious music-snob that I am, KCRW and KEXP are the only radio stations in America that I will allow my ears to listen to). As long time SM readers know, I don’t do reviews. I will however, post about music that I dig. Here is what the L.A. Weekly had to say about them: 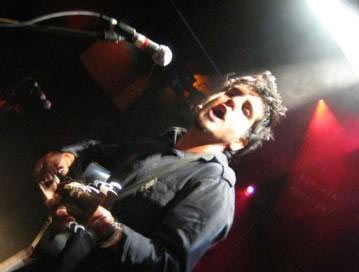 “The stars aligned for Goldspot recently — after years of tilling the fringes of L.A.’s play-to-your-friends club scene — with the release of their elegantly singable debut album, Tally of the Yes Men…Gorgeously oblivious to fads and fashion, Goldspot have woven their Cure/R.E.M./Smiths patchwork with threads of exotic melody lingering from main-man Siddhartha’s [Khosla] Indian upbringing. Onstage they rightly bask in the strength of their material, and Siddhartha’s a willing focal point, complete with love-it-or-hate-it affected-eccentric demeanor. And note to bands everywhere: Goldspot reign in the instrumental volume, allowing Siddhartha to examine every nuance of his Buckley/Orbison timbre.”

From their Myspace page:

Imagine Paul Simon heading to Mumbai to record his next record and listening to the Cure on the flight and you’re getting close.

Siddhartha (founder, lead singer / songwriter of Goldspot) is quick to pay tribute to his early influences: “I grew up listening to whatever my parents had in their cassette decks – Mohd. Rafi, Kishore Kumar, Mukesh – these were great Indian playback singers from the 1940′s and 50′s. The melodies were brilliant. And then one day when I was 14, I figured out that if you flipped the switch on the stereo from ‘tape’ to ‘radio’ you could hear music with English words. That’s when I heard R.E.M.’s Green, and it was my first introduction to Western music…” [Link]

Here is the video for the catchy Time Bomb:

So why haven’t I written about Goldspot before this? Like so much else I blame it on my dissertation. However, what jogged me into action was when I heard a new version of their song Friday (which you can listen to on their Myspace page along with three other tracks) this morning. The new version was down-right Bollywoody…and I liked it. What gives? I quickly dug up the backstory: 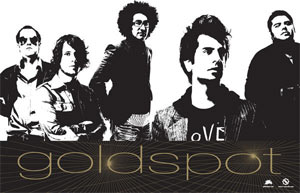 Siddhartha and Goldspot producer Jeff Peters just spent a week in Chennai, India recording with Srinivas Murthy and A.R. Rahman’s orchestra. The “bollywood” orchestra now appears on new, radio versions of “Friday” and “Rewind” that are scheduled to be released in the UK and Europe this Fall under Mercury UK (Universal Music Group). [Link]

p>I wish I could produce this new version for you all to listen to but I don’t know how to do so legally so you will just have to wait until they release it.

p>In the meantime you can check out additional live performances by Goldspot here and here. And finally, since I am sure some of you have been wondering:

[The band] takes its name from the Indian soda, Gold Spot. Lead singer Siddhartha Khosla says about the drink, “Gold Spot isn’t my favourite drink. It wasn’t even my first drink; Coke was. But we named ourselves after it because it’s bubbly and refreshing. I wish I could still drink it, but I hear that Gold Spot is no longer made in India…” [Link]

43 thoughts on “Hitting the Goldspot”