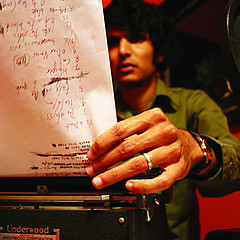 Yesterday on the radio I had the pleasure of interviewing a young desi brother by the name of Imaad Wasif. He’s a guitarist and singer who is currently touring as an additional band member (and occasional opener) for the Yeah Yeah Yeahs, and who released his first, self-titled solo album in April. Although Imaad can rock out with the best of them, his own music is of the introspective, quiet kind, a little minimalist, a little gothic, maybe a little fey at times. Listening to the album before the interview, I really enjoyed the first half, and found the second half a little slow and less compelling. Perhaps it would have benefited from a bit more time in the Nashville studio than the week-and-a-day session that the promotional materials boast about.

Having said that, I really enjoyed Imaad’s in-studio performance: he played one song from the album, “Out in the Black,” and a new song called, if I remember right, “Spell on Me.” He’s got a great touch and a lot of sincerity. Another interesting aspect was that he came in with his guitar and an electronic drone machine called a Raagini. It’s an Indian-made box that generates a drone in the manner of a tampura. He showed me the different settings before the show and it would have been cool if we’d had more time to talk about it on the air.

Imaad is another hyper-diasporic desi — his parents come from Bombay and Hyderabad but he was born in Vancouver and grew up mainly in Palm Desert, California. There’s nothing particularly desi to his trajectory as a musician. Yet at the same time, he credits as an influence the old Indian records from his father’s collection that got damaged in a flood, so that the labels all peeled off, leaving him to listen to the vinyl without knowing who was playing; and also, here he is with this Raagini machine, weaving the very Indian drone into his live performance, even though he hasn’t — yet — used it in recordings. Hybridity: it operates in mysterious, wonderful ways.

For those who enjoy introspective indie rock, or those simply looking to hear some new sounds, check this brother out. You can hear/download our conversation and his live performance here (scroll down second segment).