SM reader “busybee” posted an absolutely fascinating link on our News Tab yesterday. It seems that somewhere deep within China, near a village called Huangyangtan, is a 900 x 700 m scale model (you need Google Earth to open this file) of a mountainous region somewhere on Earth. People…that is a model 9 x 7 football fields long! A model anywhere near this scale is usually only constructed when trying to train one’s soldiers how to conquer/hold the terrain in question. 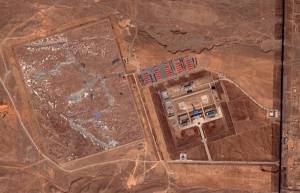 So the million dollar question becomes, “what region on Earth could this be a model of?” Such an answer seems impossible to answer on its face, but sure enough someone with way too much time on their hands was able to solve this puzzle. We have to remember back to the 1962 Sino-India war:

Don’t, however, spend the next three days scouring the world’s mountain ranges trying to find a geographical match: the legwork has already been done for you by this enterprising Google Earth Community member who correctly identified the model as representing this [you need Google Earth to open this file] disputed area on the Chinese/Indian border.

It’s of territory occupied by China but claimed by India, north and south of the east end of the Karakoram range. The borders in this region are shown in red rather than yellow to indicate the dispute. [Link] 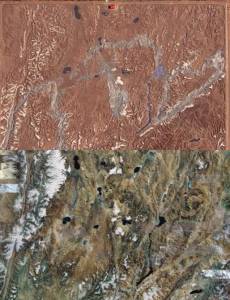 On two (1,2) previous occasions we have blogged about the fact that Google Earth makes the Indian government very nervous. They feel that their enemies (i.e. Pakistan) will be able to use Google Earth in order to observe their secret installations. However, this supports my theory that Google Earth is the 21st century’s great equalizer. During the Cold War both the Americans and the U.S.S.R had so many nukes that mutual self-destruction was assured and thereby prevented. In modern times everyone has access to Google Earth and can spy on their enemies with ease.

I also want to point out the fact that it is not that unusual that some dude was able to find the exact location on the Earth corresponding to that model. In fact, when I posted this satellite image of SM’s Los Angeles bureau offices, Saheli (who had never been there) was able to figure out the approximate address to within a few hundred yards based on the satellite image alone. Scary, I know. It was skills like that which made her a great SM guest blogger.

In the past couple of days I have made use of Google Maps and Google Earth myself in order to perform counter-surveillance operations. When away from our North Dakota bunker we must remain ever vigilant.

22 thoughts on “The coolest sandbox in the world”