Since I don’t watch these television shows, it’s a bit dicey to comment on the spate of shows featuring romances between black men and asian women, so I’ll let Rinku Sen do it for me: 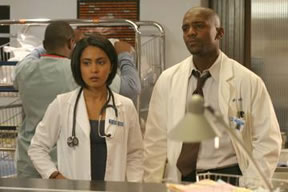 The sugary romance between the excessively noble characters played by Parminder Nagra and Shafiq Atkins on ER follows the much hotter one between Ming Na Wen and Mekhi Phifer that ended two seasons ago. GreyÂ’s Anatomy features Sandra Oh in an up-and-down relationship with Isaiah Washington.

What accounts for such interest? ItÂ’s as though these couples have been pouring out of medical schools and producers decided to capture the trend.

The representations tread the line between cultural authenticity, sometimes considered stereotype, and colorblindness. The women exhibit some level of conflict with their cultures and are slightly neurotic: Ming Na dreaded telling her immigrant parents that she was having a baby out of wedlock; Nagra quit her job in a bout of rebellion against family expectation to work as a convenience store clerk. The men are dangerous but tender. Phifer grew up without a father and has a temper; Gallant went off to serve in Iraq. I did laugh at the effort to bridge cultures, though, when NagraÂ’s character got married wearing a white sari. White is the Hindu color of mourning.(link)

If it’s on TV, is it a reflection of a real sociological trend, or simply a convenient image of happy multiculturalism from television fantasy-land? Sen’s article gets into some sociological explanations for the phenomenon, none of which are terribly convincing (I don’t think these romances have much to do with “American Empire” or colonialism). But she does argue that it goes beyond “submissive Asian woman”/”sexualized black man” stereotypes:

HamamotoÂ’s theory would suggest that such a preference was grounded in a sexual stereotype of submissive Asian women. I am familiar with our so-called seductress image. My Asian girlfriends and I spent our college years snottily rejecting the few white men who came around as Â“rice lovers.Â” While I did experience an American man mentioning the Kama Sutra within five minutes of meeting me recently in New York, my adolescent self-image was much closer to nerd than slut. To see all these Asian women who might also have been high-school nerds paired up with the most sexualized actors in American culture has been, I will admit it, a thrill. However, in real life, Asian women and Black men donÂ’t get to be both equally sexy and smart. “ItÂ’s easier for a Black man to get his foot in the door when heÂ’s with me,” said Aarti, “especially if weÂ’re working.”(link)

Class dynamics may be important in the appeal of Asians to some African Americans. And the “bad boy” image (stereotype) may make people of African descent more attractive to children of immigrants traditionally considered too studious and repressed (spelling bee/ math team champions) to be generally attractive.

Or maybe not: since there are no hard statistics, this could be just another Dubious Trend Story in line with infamous New York Times stories about baby gyms in Manhattan, or Ivy League women who decide to drop out of the rat race to become trophy wives. The next time you see an East or South Asian woman dating a black man … it may simply be that they are two people who happened to meet, and fall in love — irrespective of Parminder Nagra, and sociology be damned.

(Incidentally, for Bollywood fans, guess who played Nagra’s parents in a recent episode? Anupam and Kirron Kher, of course.)