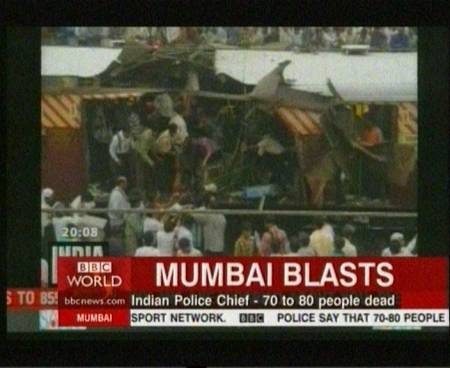 Breaking News in Bombay via AP:

Though the chaos makes it difficult to ascertain exact numbers, how many have been injured, Indiant tv reports said that “the death toll could be in the dozens.” 40 80 100 105 137 163 172 200 people have died and 300 464 700 are injured. I’m sure that before I can even update this post, one of you will comment with the latest numbers; I sincerely hope that they are not high. I know, I’m excessively idealistic, but whenever I hear “Breaking News”, “Bombs” or “Trains” or similar, I screw my eyes shut and pray for miracles.

Television images showed injured victims sprawled on train tracks, frantically dialing their cell phones. Some of the injured were being carried away from the crash site. The force of the blasts ripped doors and windows off carriages, and luggage and debris were strewn about.

Pranay Prabhakar, the spokesman for the Western Railway, confirmed that seven blasts had taken place. He said all trains had been suspended, and he appealed to the public to stay away from the city’s train stations.

Bombay, India’s financial center, and New Delhi, the capital, were reportedly on high alert. Bombay’s commuter rail network is among the most crowded in the world.

Though CNN is reporting that no group has claimed responsibility, the NYT has updated the article I originally cited with the following:

The blasts appeared to have come in quick succession — a common tactic employed by Kashmiri militants that have repeatedly targeted India’s cities.

The first explosion hit the train at a railway station in the northwestern suburb of Khar, said a police officer who spoke on the condition of anonymity because he was not authorized to talk to the media.

India’s CNN-IBN television news, which had a reporter traveling on the train, said the blast took place in a first-class car as the train was moving, ripping through the compartment and killing more than a dozen people.

…All of India’s major cities were reportedly on high alert following the attacks, which came hours after a series of grenade attacks by Islamic extremists killed eight people in the main city of India’s part of Kashmir.

The image you see above is from Ultrabrown; his post on this horrific terrorist attack is here.

CNBC’s reporter phones in to update the death toll: 100.

The Mumbai Help blog has resources, updates and a very important reminder that blood donors are needed desperately.

If you’re not shaken to your very core by this tragedy yet, perhaps this simple quote from that site will affect you as much as it has unexpectedly moved me (every other person on my team at work is a PWCer):

harshad borgaonkar from price waterhouscooper. His i-card was found amongst the debries [link]

My prayers are with all who were lost, those who are injured, those who are fighting to literally pick up the pieces and help, those who cannot reach family and friends and everyone else who is affected by this craven, calculated attack.

India’s commercial hub, was rocked by seven explosions on trains and in commuter stations yesterday, killing at least 163 people and injuring 464 in the nation’s worst terrorist attack in 13 years. [link]

There is now a wiki for the event and instead of lashing out scornfully against India’s neighbor, please note that it was created by a Pakistani-American in California named Sabahat Ashraf (via ASATA’s mailing list). SAJA says he “helped lead similar resource (sic) during 2005 Kashmir earthquake”.

Via Reuters, the grim reality of the wounded city, where predictably, they are running low on hospital beds as well as blood:

“Most of the patients have received burn injuries and are suffering from severe trauma,” M.E Yeolekar, head of Sion Hospital, told Reuters.

“In my entire career as a physician, this is the second destruction I have seen of this magnitude,” he said, referring to bomb blasts in the western city in 1993 which killed 250 and wounded around 1,000 people.

On whom we are praying for:

Hundreds of relatives frantically pored over a list of dead and injured outside the hospital, a scene repeated at many other hospitals, packed with people searching for friends and relatives.

Some of the people who entered a makeshift morgue were unable to identify badly mutilated bodies.

Considering some of the uglier talk on this thread and elsewhere, it’s important to remember that Muslims died, too:

“I spoke to him 10 minutes before he died,” said Haji Mastan, sobbing uncontrollably over the death of his cousin Mukti Mahmood Darvesh, who was travelling on one of the suburban trains.

“Why did it have to end like this? He was young and he has children.”

It’s always darkest before the dawn:

In another hospital, staff constantly mopped up blood from the floor as patients were being wheeled in by the minute.

“We collected scattered limbs with our own hands and put them in bundles and sent them to hospital,” said Santosh Patil, a railway labourer, as he stretchered in a mangled body.

First person account of an attack designed for maximum carnage:

“It was a deafening sound and before anybody could realise anything the roof of the train was ripped apart,” said Mukund Thakur, who was travelling to the northern suburb of Andheri.

“People were thrown outside. I saw limbs strewn around me.”

During our lowest moments, all we have is each other:

Local people distributed food and water among hundreds of people who waited for news from their near and dear ones.

“We are trying to persuade them to have something,” Gurpreet Singh Bangar told Reuters.

“In this moment of distress and tragedy, people don’t care for food,” he said. “But everybody has to live.”

More from the Beeb. Some commuters never had a chance:

An eyewitness at Mahim told the BBC some of those who had jumped from the train were run over by another train coming in the opposite direction.

Others were lost in the stampede which was inevitable, considering all the panic.

What price, for a life? Nothing can truly compensate for such a staggering loss, but…

The Indian railway minister, Laloo Prasad Yadav, has announced financial help for the victims and their relatives. He said relatives of those killed will get 500,000 rupees ($11,000) each.

He has promised jobs for the victims’ relatives and said the railways would also bear treatment costs for the injured.

I know, it’s ten hours old, but this quote from the web chat WaPo hosted with Suketu Mehta, the author of Maximum City, almost makes me smile:

Washington, D.C.: As a former Bombay resident, I was pleasantly pleased at the way the city reacted to the bomb blast last time around. I hope the same sense will prevail this time as well — nothing defeats the terrorists more than gettting back to normal within hours of such an incident.

Every resident of the city — former or current — walks wounded today.

Suketu Mehta: Bombay is not going to be beaten down by these blasts. In 1993, the blasts killed 257 people; one of the buildings bombed was the Stock Exchange. The plotters were hoping to cripple the financial nerve center of the city. When the Stock Exchange reopened two days later, using the old manual trading system because the computers had been destroyed, it actually gained ten percent in the next two days. Just to show them.

Mutineer Neha reminds me to check and then change the “tolls”. At this point, 900 people are either dead or injured (200/700). Have mercy.

The number of dead in the eight near-simultaneous bombings during Tuesday evening’s rush hour in India’s financial hub has risen steadily as rescue efforts uncovered more bodies and people have succumbed to their injuries.[link]

Meanwhile, the city kept on keepin’ on and Suketu Mehta (see Update #

was right. As one tipster wrote about the Sensex in our News tab, “Can’t touch this”:

Following the serial bomb blasts in Mumbai yesterday, the Sensex opened marginally (nine points) lower at 10,605…Early nervousness saw the index slip to a low of 10,550. However, buying emerged at these levels and the index rebounded into the positive zone.

Unabated buying in technology and select index heavyweights saw the index surge to higher levels in the latter half of the day. The index touched a high of 10,939 – up 389 points from the day’s low. The Sensex finally ended with a gain of 3% (316 points) at 10,930.[link]

More, from the Guardian/AP. While people once again board trains and the city limps back to its routine, hell isn’t over for far too many Mumbaikars:

Authorities say they do not know how many missing people there are. But Indian television stations are broadcasting pictures of dozens of missing in the hopes of helping relatives locate them.

You know how everyone knows or is related to someone in NYC? Same with Bombay:

“I’ve been searching for hours. I don’t know where else to go,” he sighed.

His colleague’s family lives in the southern city of Bangalore. “His wife called me up and said she hadn’t heard from him and we’ve been searching ever since.”

Because so many hospitals are treating victims, the search is difficult, Ahir says. Making matters worse, many with lesser wounds have been sent to the city’s many small clinics because the hospitals are overflowing.

“What do I tell her when she calls again?” he asked.

I hadn’t even thought of this heartbreaking reality:

There are also victims without families.

At a suburban hospital, a small boy lies unconscious, an oxygen mask strapped to his face. No one knows who he is.

“We searched him for identification, any photographs, but there is nothing,” said volunteer Shilpa Basin. “What if he was traveling with someone and they are injured as well?”

How many children are orphans now? If he wakes up, will this little boy even know where he’s from, what his parents’ names are, who he is? Heartbreaking.

This reminds me of Lower Manhattan, after September 11:

Gandhi, a college student, said her family had spread out to various city hospitals. “We’re taking his picture and showing it to anyone – to injured people, even to relatives of victims. Maybe someone will remember seeing him and we will find him,” she said.

Another horrifying problem: how do you identify someone after something like this…

Gautam Chavan, is fearing the worst.

“I saw how the coach had exploded, if that is the state of a rail coach, what chance do people inside have?”

Scenes of badly wounded people being brought to the hospitals upset him.

“What if we can’t recognize him? What if he’s not recognizable? When will we know?” he cried.

Via The Hindu: Pakistan’s Foreign Minister Khurshid Mehmood Kasuri makes tactless remarks, which rightfully get condemned by India (and me).

External Affairs Ministry Spokesman Navtej Sarna said “no cause” could justify killing of innocent people…we find it appalling that Foreign Minister Kasuri should seek to link the blatant and inhuman act of terrorism against innocent men, women and children to so called lack of resolution of disputes between India and Pakistan”.

What did the Foreign Minister say exactly? Oh, just this:

Kasuri has said the “best way” of dealing with extremism in South Asia is to tackle “real issue” of Jammu and Kashmir.

Right, because that justifies the slaughter of innocents.

Noting that not much progress has been made on Kashmir problem, (Kasuri) said “incremental approach is good but now we must tackle real issues. And this is the best way of tackling extremism in South Asia”.

Of course it is. Kill first, talk later.