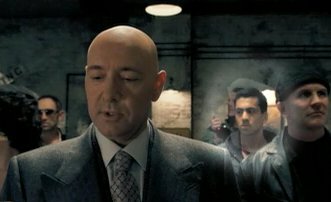 Since Abhi my colleagues at Sepia Mutiny have apparently stopped doing their earlier hourly updates on what Kal Penn is up to, I feel it is incumbent upon me to remind readers that second-gen actor Kal Penn plays one of Lex Luthor’s henchmen in the new film Superman Returns (aka, the “American version of Krrish“). Reviews have been pretty positive, though there are still some signs that the film may be a load of “Kraptonite” (or, in a nod to Manish, Krraptonite!), but how can that stop me from loyally supporting the ABCDeNiro?

And no, he doesn’t play a vaguely middle-eastern terrorist type. Nor does he speak in a bad Indian accent. In fact, in the final cut of the film, I gather, Kal Penn doesn’t have any speaking lines at all. Also, his character is named “Stanford.” Ah well: if they don’t have you playing the demonic terrorist, they’ll have you whipped as the “model minority.” Sigh.

At least he’s on the right side. From the trailers, this version of Superman seems like one of those movies with a hero so annoyingly earnest you end up rooting for the bad guys to win. Of course, with bad guys as charismatic as Kevin Spacey (or indeed, Kal Penn), that comes pretty easily. Can you think of other examples in this genre? Bad guys so diabolical and cool that you’re practically depressed when they’re finally vanquished at the end?