A couple of weeks ago Kansan Raj Goyle filed the necessary papers to take a run at a seat in the Kansas House of Representatives (thanks for the tip AK). The Wichita Eagle reported:

Flanked by family, friends and supporters, Raj Goyle announced his bid for a seat in the Kansas House of Representatives on Tuesday at Wichita State University.

Goyle, 30, is the only Democrat to file against incumbent Bonnie Huy for the 87th District seat.

Huy, a Republican who was first elected to the House in 2000, has filed for re-election.

Goyle grew up in east Wichita and graduated from Duke University in 1997 and Harvard Law School in 2000. A lecturer at Wichita State University, Goyle said he will push for more education funding, improved health care, better jobs and neighborhoods and alternative energy sources.

Goyle has worked as a constitutional lawyer and a policy analyst. He was an intern at The Wichita Eagle during the summers of 1992 and 1993.

He also has worked for the Maryland ACLU on post-Sept. 11 immigration issues and voting rights, and was an advocate for homeland security issues in Washington, D.C. [Link]

p>Those are the type of credentials I like to see in a desi candidate. Harvard Law followed by work with the ACLU will hopefully get him the win, although a democrat running in Wichita obviously has his work cut out for him. We have also learned that the more qualified candidate can still fall short sometimes. There is more about Raj on his website:

My life in Wichita began at the tender age of nine months old and it wasn’t long before I was bringing people together to help improve our community. When I was 15, I helped organize a community-wide recycling program that saved hundreds of pounds of garbage from the county landfill and led to a large cleanup of the Arkansas River downtown. As a reporter for the Wichita Eagle, I worked with U.S.D. 259 to produce the annual ‘back-to-school’ issue and wrote a column on each high school in the city…

In high school, I was active in sports, debate, and newspaper, and was honored to graduate as both valedictorian and student body president. [Link]

Raj also obtained an endorsement from Kansas Governor Kathleen Sebelius (who by the way is also a Democrat). The one thing that I would like to see from Goyle is a strong position on keeping (Un)Intelligent Design out of classrooms in his district. I didn’t notice anything specific about this hot-button issue (especially hot in Kansas) on his issues page, but he does advocate “Revers[ing] the Brain Drain” and “Educating Our Children.”

In addition to support from the Governor, Raj also has the unlikely backing of Fred Glassco who is part of the leadership in the Kansas Legislature.

“I’m a lifelong Republican and I’m voting for Raj. I know he is the kind of leader who will work hard for our district and Wichita. The Legislature needs someone like Raj to work for us…” [Link]

p>If anyone feels like donating to his campaign you can find a link here.

p>One last thing. Check out the 87th district below. This is a great example of why it is so damn hard to unseat an incumbent in this country. How the hell do they come up with a district shaped like this? 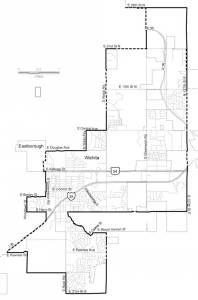