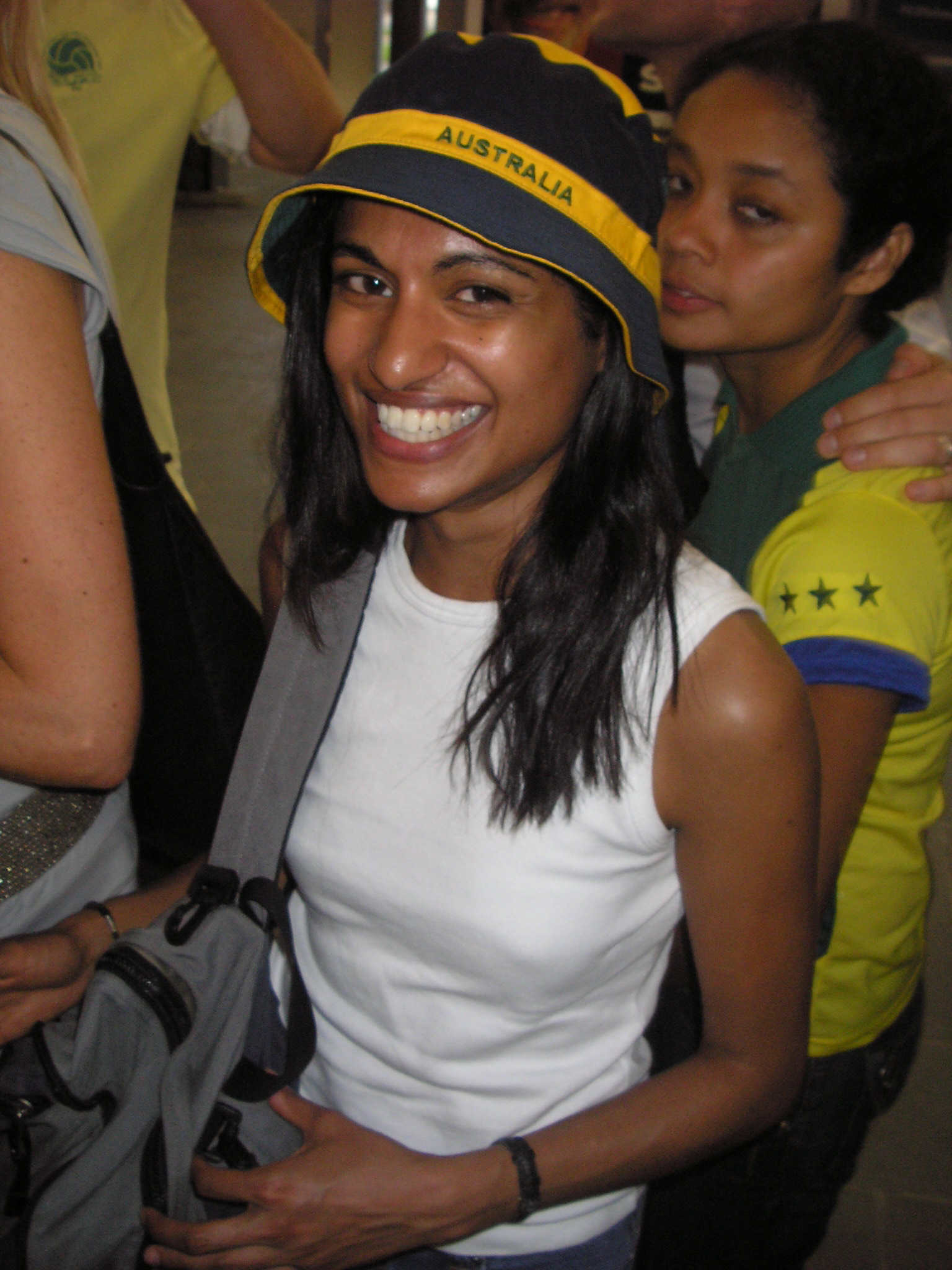 Freshly back from Germany where he attended several first-round matches, reader “Farouk Engineer” shares this photograph of an Australia fan encountered amidst the swirling hordes of international merrymakers currently roaming the land of Goethe and Bratkartoffeln.

In just a few hours from this writing, we’ll know whether the sister’s impossible dream of seeing the Socceroos hoist the World Cup lives another day. Australia takes on heavily-favored Italy at 1700 CET. But the result is no foregone conclusion. Australia have earned admirers for their fluent, enthusiastic football. Made up mostly of journeymen who play for not-quite-marquee European sides (Middlesbrough, Alaves, Dresden…) Australia are a sort of deluxe version of the US team that held Italy to an ill-tempered 1-1 draw. Their coach, flying Dutchman Guus Hiddink, was the artisan of the 2002 South Korea side that rampaged through a series of upsets of highly rated Mediterranean sides including Portugal, Spain, and, yes, Italy. Meanwhile, Italy will play without their veteran defensive anchor Alessandro Nesta. I still like gli Azzurri to take this one, but if Australia can drag it into extra time, a famous upset could be in the making.

In other news, yesterday’s Netherlands-Portugal slugfest had to be one of the uglier matches ever, with Russian referee Valentin Ivanov losing control of proceedings early and reduced to gallivanting about the field brandishing yellow and red cards. Sixteen of the former and four of the latter amounted to a disgrace of a game in which the referee’s card-happiness provoked the players into great petulance, and vice versa.

Amid all this Holland lost 1-0 and they had it coming to them. The Dutch are much-loved in the football world, but much of it is based on past glory (the 1970s “Total Football” side anchored by the great Johann Cruyff), more recent elegant but underachieving sides, and good public relations. At the same time, Holland has some of the roughest hooligans (the pitched battles between Ajax and Feyenoord ultras are legendary) and vulgar, inebriated supporters. “Farouk” reports running into squadrons of middle-aged Dutch men in Germany dressed in nothing but clogs and orange women’s bikinis with their private parts casually dangling out. Lovely!

More to the point, this year’s Holland team, though possessed of some fine young talents like the wingers Robben and Van Persie (not to mention the superbly named Jan Venegoor of Hesselink, whose 19-letter last name they’ve somehow managed to crowd onto the back of his shirt), were a bunch of cheaters, divers and thugs who yesterday got back as well as they gave and found themselves on the losing end of the battle. Holland’s first-round 2-1 triumph over Ivory Coast was a first-rate robbery in which the Africans were denied two obvious penalty kicks while the Dutch flopped about to draw fouls like a pack of beached seals. Yesterday the Portuguese were no angels either, but hey, they’d studied the playbook. And the game’s one goal, a fine slotted ball by Maniche from a pass in the box by Pauleta, came before any of the chaos and theatrics, making this a legitimate and well-earned result despite all that ensued.

What is supremely annoying is that the big winner from all this is Sven-Goran Eriksson’s utterly pedestrian England side, who eked out another narrow victory, over outsiders Ecuador, and in the quarter-finals will face a Portugal deprived through suspension of two key players, Deco and Costinha. And Portugal ace Cristiano Ronaldo will be doubtful due to a thigh injury caused by the two outrageous assaults the Dutch landed on him in the early moments of the match.

All of which means that England, a side completely bereft of style and collective technique, coasting on the individual brilliance of David Beckham at the two things he knows how to do (crossing from the right, and free-kicks) and that one amazing Joe Cole golazo, could have an easy path to the semi-finals and then, with Wayne Rooney’s Lazarus-ish recovery progressing apace, they could just… Yikes.

(Portugal-England is Saturday at 11 am EDT. There may be an informal Sepia excursion to watch it in the fantastic atmosphere of the theater-like Portuguese Club in Newark, NJ. If interested, leave a note in the comments.)

Elsewhere in the brackets, today sees a Ukraine-Switzerland contest that ensures that England will not be the least inspiring team in the quarter-finals. Ukraine is made up of ten random guys plus ace center-forward (and new Chelsea purchase) Andriy Shevchenko; Switzerland are a stolid, defensive team that plays to national stereotype, who could just bore their opponents to sleep and end up winning on penalty kicks. The winner faces the Italy-Australia victor, which means that if the ‘Roos should pull this thing off, we could realistically see them in the semis.

So, um, what about the good football? Well, Argentina and Mexico provided a boatload of that in their epic overtime match yesterday. On balance the Albiceleste’s 2-1 win was deserved, with Maxi Rodriguez’s astonishing golazo a suitable clincher (if you haven’t seen it yet, PLEASE click the link). It was always going to take a feat of individual inspiration for Argentina to beat a well-organized, tactically sound Mexican side that had come equipped with solutions. Argentina’s quarterfinal against hosts Germany, who easily beat a Sweden side that never seemed fully awake, could be one for the ages. I love what Klinsman has done with this German team, and I always like to see the host country do well, but coach Pekerman’s Argentina side is on another level. Vamos Argentina!

Which leaves us with tomorrow’s mouthwatering offerings. The early match is the Third World connoisseur’s delight, Brazil versus Ghana in a billing that just brims with style, grace, and liberation. It will be an apotheosis, and it’s not guaranteed that Brazil will come out on top, even though Ghana will be without the suspended Michael Essien. Brazil have some weaknesses, especially in central defense, and with Robinho out due to injury, look for the lumbering duo of Ronaldo and Adriano to both start the game, which will result in a clogged-up attack instead of the sumptuous stuff we saw in the Brazil-Japan game. The Ghanaians have nothing to lose here — going out in the World Cup to Brazil is only second-best to winning the whole damn thing — and they’ll offer a game to match the occasion. In the end, I see this coming down to a genius strike from range by Kaka or Ronaldinho.

The afternoon sees the most interesting match-up of the lot, from a tactical standpoint, between the half-way resurrected France and the free-flowing Spain. On the strength of recent performance, you have to like Spain, but this will be a tough one for them. As poorly as France have been playing, they have an ultra-tight defense, and they could easily frustrate Spain into making a mistake, or take the match into extra time and perhaps penalties. Both teams have star-player issues: France need Zidane for his enduring creativity and vision on the field, but they also play a more liberated game without him; Spain has the Raul conundrum. With racist coach Aragones reported to be planning on starting Raul, look for a diminished Spain attack; with Zidane on the field, look for an uncomfortable but not incompetent France side that could still spring a lightning Thierry Henry counter-attack. There is no way I could see this France team beating an Argentina, but Spain — who always have a top-rated team yet unfailingly collapse at some point in the tournament — may prove a more digestible target.

It’s a just minutes to Italy – Australia. Can the ‘Roos do it?

48 thoughts on “Golazos y Tarjetas Rojas: Monday at the Cup”