William Dalrymple, a British travel writer and scholar of Indian history, sometimes gets himself into hot water with Indian critics. He was attacked by Farrukh Dhondy a couple of years ago for criticizing V.S. Naipaul’s pro-communalist comments, and then more recently by Pankaj Mishra for lamenting the state of non-fiction writing in and about India. But whatever you think of his role in these arguments, Dalrymple as a historian is the real deal: his book Delhi: City of Djinns is an amazing historical travel narrative, which blends Dalrymple’s experiences in modern Delhi with a great deal of careful research into Delhi’s formidable past. 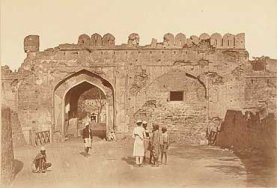 The current issue of Outlook India has a nice essay by Dalrymple on the Indian Mutiny/Rebellion of 1857 (thanks, Indianoguy!). The essay is really in three parts: one is a fresh look at the fall of Bahadur Shah Zafar, the “last Mughal” — whose sons were all executed (murdered) by the British after the Rebellion. The second part is a discussion of “Mutiny papers” in the National Archives of India that Mahmoud Farooqi has been translating from Urdu. These documents show the Indian perspective on the events of 1857, where one finds, among other things, that the rebels were motivated by religious rage to a very great extent. Finally, there is a discussion of contemporary Delhi — in which preserving the emblems of this past is of very little interest to most people. Though I remember reading somewhere that one of the main causes of the failure of the Rebellion was Zafar’s age and his failure to act decisively (see details at Wikipedia), Dalrymple has a slightly different take. There’s no doubt that Zafar was old at the time the Mutiny occurred (he was about 80), but his weakness was not his fault. He only ascended the throne at age 60, by which time it was too late to do anything to revive his family’s dead empire. Moreover, he contributed a great deal to literature:

Zafar came late to the throne, succeeding his father only in his mid-60s, when it was already impossible to reverse the political decline of the Mughals. But despite this he succeeded in creating around him in Delhi a court of great brilliance. Personally, he was one of the most talented, tolerant and likeable of his dynasty: a skilled calligrapher, a profound writer on Sufism, a discriminating patron of miniature painters and an inspired creator of gardens. Most importantly, he was a very serious mystical poet, who wrote not only in Urdu and Persian but Braj Bhasha and Punjabi, and partly through his patronage there took place arguably the greatest literary renaissance in modern Indian history.Himself a ghazal writer of great charm and accomplishment, Zafar’s court provided a showcase for the talents of India’s greatest love poet, Ghalib, and his rival ZauqÂ—the Mughal poet laureate, and the Salieri to Ghalib’s Mozart. (link)

One could of course argue, echoing Tagore, that mystical poetry is the consolation of a defeated people, but this is definitely better than the standard image of Zafar as an indecisive invalid. (Some of Zafar’s Urdu ghazals are here) 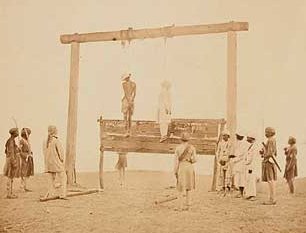 Dalrymple also strongly condemns the violence involved in the suppression of the Rebellion, including the (ghastly) British decision to summarily kill all of Zafar’s sons and the wanton destruction of priceless monuments (including the palace inside the Red Fort) in Delhi and other Indian cities. This wasn’t enlightened Liberalism or Imperial benevolence, but a dirty war in which indiscriminate killing and humiliation were used to ensure victory.

From my perspective, the most interesting parts of Dalrymple’s piece detail the 20,000 Urdu documents in the National Archives that are now being translated by Mahmoud Farooqi. Partly they are interesting because they add to our image of everyday life in India at that time:

What was even more exciting was the street-level nature of much of the material. Although the documents were collected by the victorious British from the palace and the army camp, they contained huge quantities of petitions, complaints and requests from the ordinary citizens of DelhiÂ—potters and courtesans, sweetmeat-makers and over-worked water carriersÂ—exactly the sort of people who usually escape the historian’s net. The Mutiny Papers overflow with glimpses of real life: the bird-catchers and lime-makers who have had their charpoys stolen by sepoys; the gamblers playing cards in a recently ruined house and ogling the women next door, to the great alarm of the family living there; the sweetmeat-makers who refuse to take their sweets up to the trenches in Qudsia Bagh until they are paid for the last load. (link)

But it’s more than that. What the papers underline is the extent to which religious feelings drove the rebels. It goes well beyond the question of “greased cartridges”:

As the sepoys told Zafar on May 11, 1857, “we have joined hands to protect our religion and our faith”. Later they stood in Chandni Chowk, the main street of Old Delhi, and asked people: “Brothers: are you with those of the faith?” British men who had converted to IslamÂ—and there were a surprising number of those in DelhiÂ—were not hurt; but Indians who had converted to Christianity were cut down immediately. It is highly significant that the Urdu sources usually refer to the British not as angrez (the English) or as goras (Whites) or even firangis but instead almost always as kafirs (infidels) and nasrani (Christians).

Although the great majority of the sepoys were Hindus, in Delhi a flag of jihad was raised in the principal mosque, and many of the insurgents described themselves as mujahideen, ghazis and jihadis. Indeed, by the end of the siege, after a significant proportion of the sepoys had melted away, unpaid, hungry and dispirited, the proportion of jihadis in Delhi grew to be about a quarter of the total fighting force, and included a regiment of “suicide ghazis” from Gwalior who had vowed never to eat again and to fight until they met deathÂ—”for those who have come to die have no need for food”. One of the causes of unrest, according to one Delhi source, was that “the British had closed the madrasas”. These were words which had no resonance to the historians of the 1960s. Now, sadly, in the aftermath of 9/11 and 7/7 they are words we understand all too well, and words like jihad scream out of the dusty pages of the source manuscripts, demanding attention. (link)

I don’t think Dalrymple is saying that everyone involved in the Rebellion of 1857 was motivated by this kind of religious feeling (indeed, as I understand it there were as many or more Hindu sepoy rebels). But it is worth considering whether people might feel differently about the concept of “jihad” when one shares a political and military goal with a Jihadi.

Finally, Dalrymple talks about the total indifference to the past that many contemporary Indians feel. As Dalrymple puts it:

I find it heartbreaking: often when I revisit one of my favourite monuments it has either been overrun by some slum, unsympathetically restored by the asi or, more usually, simply demolished. Ninety-nine per cent of the delicate havelis or Mughal courtyard houses of Old Delhi have been destroyed, and like the city walls, disappeared into memory. According to historian Pavan Verma, the majority of the buildings he recorded in his book Mansions at Dusk only 10 years ago no longer exist. Perhaps there is also a cultural factor here in the neglect of the past: as one conservationist told me recently: “You must understand,” he said, “that we Hindus burn our dead.” Either way, the loss of Delhi’s past is irreplaceable; and future generations will inevitably look back at the conservation failures of the early 21st century with a deep sadness. (link)

Cremating the dead is one thing — but forgetting them entirely is quite another.

84 thoughts on “Dalrymple on 1857: the Religious Component”