The past month or so has taught me that there are a lot of people out there that want to see this blog, and what it is all about, succeed. The emails we recently received offering technical support, as well as the offers of financial support we have gotten, have led me to conclude something similar to what one forward looking American politician once said. To paraphrase:

“We’ve earned capital in this blogosphere, blog capital, and now I intend to spend it. It is my style.”

So with that I am announcing the creation of The Desi Dad Project. 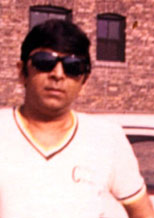 For the past six months I have been mulling this idea over in my head. Photographs, even without any words or explanations, can convey a tremendous amount of information and history. Just look through these pictures of some of the first Indian Americans that came to the U.S in the early 20th century, most of them Sikh Punjabis. Recently, with the immigration debate in this country raging on, we have discussed the signifigance of the 1965 Immigration Act and how many of our fathers immigrated to the U.S. as a result of this act. Eventually this led to many of our births.

So this is what I am proposing, particularly in light of Father’s Day which is just two weeks away. I want you guys to upload a single picture of your dad. I want a photographic archive that captures the spirit of what it meant to be an immigrant in this country as part of the second wave. I want to capture that part of our collective history before it rots away in old albums in our basements, attics, and closets. This project won’t end with Father’s Day though but will keep accepting phtographs.

Here are the criteria you must meet before uploading a picture of your father into this new archive I am proposing:

Don’t just upload the first old picture of your father that you find. Put some thought into it. Select a picture that you feel best captures the spirit or attitude of your father in that particular time in American history. Pictures in front of famous or historical American landmarks or taken at historically significant events would also be fantastic. Remember that the main point of this is to capture through pictures what it meant to be a South Asian immigrant in the U.S. during the second wave which followed the ’65 Immigration Act.

IMPORTANT: Follow (to the letter) my instructions below for how to upload your picture. Make sure that if you scan it you use high resolution (300 dpi) so that we can all have good quality images to look through. Email this post to as many friends and relatives as possible. The larger this database of pictures the bigger the story it will ultimately convey.

There are TWO ways to upload your father’s picture into The Desi Dad Project Flickr album which can be found here:

Method 1) Upload the picture to your own Flickr album first. If you don’t have a Flickr account then it only takes a minute to create one. If you have a Yahoo account then you can use the same login and password to log in to Flickr. They are partners. When you upload your picture title it your father’s name followed by the approximate year that it was taken in. For example:

You can also add a brief description of your dad such as where he immigrated from and what his profession was or the context of the picture. You don’t have to though. Once you have uploaded your picture go to Search–> Groups at the top of the Flickr page. Type in “The Desi Dad Project.” Once you click on the link you should click on “Join this Group.” Next, go back to the picture of your dad in your own album and click on it to see the full image. Above the picture you will see several icons. Click on the icon that says “Share with Group” and select “The Desi Dad Project.” That’s it. Easy as pie. Note that you can only upload a single picture so consult with your siblings, choose wisely, and properly edit the name and description before uploading.

Method 2) I strongly urge you to use Method 1. If you just refuse to open a Flickr account then you can EMAIL the picture to the following address as an attachment:

VERY IMPORTANT: You MUST put your dad’s name followed by a comma, followed by the year the picture was taken in the SUBJECT line of your email. The body of your email should contain the description of your father only. Make sure to TURN OFF ANY AUTOMATIC EMAIL SIGNATURE that is normally included at the bottom of your outgoing emails.

NOTE: **By uploading a photograph on to this website you are giving me permission to use the photograph that you upload in whatever more permanent display I ultimately choose for this historical collection or whatever else I choose to do with them as related to The Desi Dad Project. Also make sure to get permission from your father if you are still able to.**

Now let me explain before someone asks, “Abhi, why are you being so sexist? Why can’t we upload pictures of our Moms? They are just as important.”

Answer: Three reasons. First, because Father’s Day is coming up. Second, because in most cases our father’s came to this country first and many of them came alone. And third, and most importantly, there WILL be a Desi Mom Project next May, just in time for Mother’s Day.

If you have any questions please email me or leave them in the comments. Thank you all in advance for participation in what I hope will turn into one hell of a database of images for our community to share. Let your friends know about this project, please. This project does NOT END on Father’s Day. It is an open album.

70 thoughts on “The Desi Dad Project”