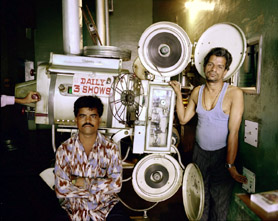 Technics aside, a perfect photograph usually involves both, an absorbing subject matter and an image that leaves an imprint as if it were a memory of one’s own. Take these qualities and wrap them around India’s filmi phenomena, turn the roll into a series and what you have is the stuff that dreams are made of. Bollywood dreams, to be (slightly inaccurately) exact.

Jonathan Torgovnik‘s extensive travels throughout India in the early 90s led him to rural India’s nomadic cinema halls and the masala movie sets of Chennai and Mumbai. On the way he managed to create a completely riveting contribution to the study of Indian cinema in the form of Bollywood Dreams (Phaidon Press, 2003). This (unbelievably perfect coffee table) book feels like a deeply personal photo essay as well as a tribute to Indian cinema’s grass roots. All seen through the eyes of a former combat-photographer for the Israeli army.

Online exhibitions of Torgovnik’s work with the Indian film industry can be found at Digital Journalist and foto8. A short (5min.) self-narrated clip of his photographs can be found at Google viddy. His website too is chock full of goodies, like the Mumbai laughing clubs series, which is reducing me to fits of giggles just thinking about it. Or the Satosh series, which is pure breaking my heart. Either way, I can’t stop looking.