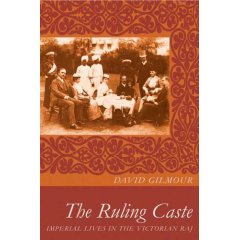 Stalin found it “ridiculous” that “a few hundred Englishmen should dominate India.” [Link]

A new book by historian David Gilmour, The Ruling Caste: Imperial Lives in the Victorian Raj (Farrar, Straus and Giroux 2006), “helps explain how [the British civil servants in India] pulled it off.”

The Ruling Caste paints an arresting and richly detailed portrait of how the British ruled 19th-century India — with unshakeable self-confidence buttressed by protocol, alcohol and a lot of gall…. [For example,] one 24-year-old district officer found himself in charge of 4,000 square miles and a million people [Link]

The arrogance of the British administrators and the paternalistic means by which they viewed their Indian subjects is upsetting, though not unsurprising. One viceroy is quoted by Gilmour as saying:

“We are all British gentlemen engaged in the magnificent work of governing an inferior race.”

Few shared Queen Victoria’s “romantic feelings for ‘brown skins….’” Well into the 20th century, they spoke and wrote of the need to treat Indians as “children” incapable of ruling themselves.

Despite Gilmour’s insights into the personal lives and thoughts of these administrators, Tharoor is critical of the book’s failure to examine the Indian response to the British public officials, who were “members of the Indian Civil Service (ICS)”:

What is missing, though, is any sense of an Indian perspective on these men and their work. What did the subjects of their administration think of them? Gilmour does not tell us. He glosses over the prejudice and casual racism of many ICS men.

Thankfully, there are other sources for this information. For starters, former SM guest-blogger Amardeep Singh has this post on an address by Manmohan Singh in which the Prime Minister states:

There is no doubt that our grievances against the British Empire had a sound basis for…. Indeed, at the beginning of the 20th Century, “the brightest jewel in the British Crown” was the poorest country in the world in terms of per capita income. However, what is significant about the Indo-British relationship is the fact that despite the economic impact of colonial rule, the relationship between individual Indians and Britons, even at the time of our Independence, was relaxed and, I may even say, benign.

This was best exemplified by the exchange that Mahatma Gandhi had here at Oxford in 1931 when he met members of the Raleigh Club and the Indian Majlis. The Mahatma was in England then for the Round Table Conference and during its recess, he spent two weekends at the home of A.D. Lindsay, the Master of Balliol. At this meeting, the Mahatma was asked: “How far would you cut India off from the Empire?” His reply was precise – “From the Empire, entirely; from the British nation not at all, if I want India to gain and not to grieve.” He added, “The British Empire is an Empire only because of India. The Emperorship must go and I should love to be an equal partner with Britain, sharing her joys and sorrows. But it must be a partnership on equal terms.” This remarkable statement by the Mahatma has defined the basis of our relationship with Britain. [Link]

43 thoughts on “The Guardians of the British Raj”