I meant to post about this in a more timely manner, but a brown holiday I find somewhat romantic is commemorated every February 21st in Bangladesh; yesterday was Language Movement Day. Also known as Language Martyr’s Day, its point is to remember the protest made on behalf of the right to use Bengali as a national language:

Around 1950-52, the emerging middle classes of East Bengal underwent an uprising known later as the Language Movement. Bangladeshis (then East Pakistanis) were initially agitated by a decision by Central Pakistan Government to establish Urdu, a minority language…as the sole national language for all of Pakistan. The situation was worsened by an open declaration that “Urdu and only Urdu will be the national language of Pakistan” by the governor, Khawaja Nazimuddin. [wiki] 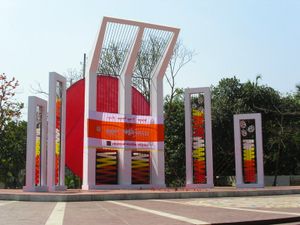 Now you’ll know why Bangladesh’s Shaheed Minar monument exists where it does:

On February 21, 1952, dozens of students and political activists were killed when the Pakistani police force opened fire on Bengali protesters who were demanding equal status to their native tongue, Bangla. The massacre occurred near Dhaka Medical College and Ramna Park in Dhaka. A makeshift monument was erected the same night by students of University of Dhaka and other educational institutions, but soon demolished by the Pakistani police force. [wiki]

The movement spread to the whole of East Pakistan and the whole province came to a standstill. Afterwards, the Government of Pakistan relented and gave Bengali equal status as a national language.[wiki]

First they won respect for their language, then in 1971, they won their freedom.

29 thoughts on “For the Love of Language”