As an update to Manish’s post below, I opened today’s Washington Post, surprised to find this item in the Names and Faces column – - DC’s answer, if there is one, to New York Post’s Page 6. 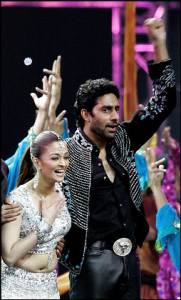 Two of Bollywood’s brightest stars, Aishwarya Rai and Abhishek Bachchan, are planning to wed, and according to the Times of India, astrologers say they are a perfect match. Rai, 32, is one of Bollywood’s most recognizable ladies, a former Miss India who starred in the movie “Bride & Prejudice.” Bachchan, 30, is the son of legendary actor Amitabh Bachchan. The couple have been in the news with a series of high-profile relationships — Rai dated heartthrob Salman Khan and actor Vivek Oberoi, and Bachchan was previously engaged to actress Karisma Kapoor .

p>It’s telling that speculation regarding two Bollywood stars is making its way into a mainstream American newspaper. Ten years ago, I would never have dreamed of finding an item on two Indian film stars in any newspaper, let alone one of the preeminent papers in the country. That national American dailies are detailing the sordid love lives of Indian film stars (with photos) is kind of groundbreaking and reflects not just a growing American interest in Bollywood and Indian cinema, but also that Bollywood is not just a fly-by night fad and here to stay. Sure the average American may have heard of, if not seen Aishwarya, but do they care, or even know who Salman Khan, Karisma Kapoor and Vivek Oberoi are? I think the Washington Post is encouraging them to find out.

p>As an aside, sure Ash is TMBWITW, but the paper gets it wrong. Ash was never Miss India, but instead a Miss India runner-up in 1994, and subsequently went on to win the title of Miss World. The Miss India title that year (1994) went to Sushmita Sen, who subsequently became Miss Universe.