The Washington Post reports on news that is music to my ears. Scientists AND “big business” are actually joining forces for a cause that they know to be important:

Business and science groups are reviving images of the Cold War space race in an effort to persuade lawmakers to spend millions to recruit and train high-caliber math teachers.

They argue that, just as a stronger focus on math helped the United States top the Soviet Sputnik launch by putting a man on the moon, the country needs to improve math education to win an economic race with China and India and a national security race against terrorism…

“The interesting sort of difference in the dynamic then and the dynamic now is that we were competing with a military threat, whereas now it’s much more an economic threat,” said Susan Traiman, an education and work force policy lobbyist for the Business Roundtable. [Link]

Many groups have been sounding this alarm bell for a while now, but nobody listens. From 2002: 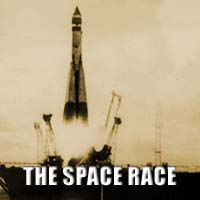 The U.S. Commission on National Security for the 21st Century warns, “The harsh fact is that the U.S. need for the highest quality human capital in science, mathematics, and engineering is not being met… We not only lack the homegrown science, technology, and engineering professionals necessary to ensure national prosperity and security, but also the next generation of teachers of science and math at the K-12 level… The nation is on the verge of a downward spiral in which current shortages will beget even more acute future shortages of high-quality professionals and competent teachers.”

According to the 2000 National Assessment of Educational Progress (NAEP), student science scores for grades 4 and 8 are flat and there has been a slight decline in scores for grade 12 since the assessment was last administered in 1996. Furthermore, 84 percent of science teachers and 86 percent of mathematics teachers in grades 5-8 did not major in science or mathematics. This report further underscores the need for reform and investment in math and science education, particularly at a time when our economy, national security and technological advances are heavily dependent on the quality of our future workforce. [Link]

Here is the key problem though. Congress isn’t going to fund math and science at higher levels until ordinary citizens call them up and ask them to. However, most people aren’t going to pick up the phone unless they are inspired to do so. Silly television shows about math, just ain’t going to cut it. The nation needs to pursue a worthwhile cause that will engender homegrown talent. This is why I think America needs to more aggressively join the new space race by integrating Bush’s NASA initiatives into a broader science education agenda. Let’s look for something positive in the SOTU address tonight.

The lobbying also looks to public opinion, and it can be difficult to inspire much passion for math even though Americans worry about jobs moving overseas, the number of college math majors is declining and student math scores lag behind those of many other countries.

The Soviets launched Sputnik in 1957, an epic event to Americans alive at the time but now known to many only from brief references in history class. The United States sent Neil Armstrong on his moonwalk in 1969, ancient history for students now debating whether to take a tough high school math class or pursue math careers.

India will be deciding within the near future if it is going to enter the space race as well:

After the moon mission, India wants to reach out to Mars and the government is keen to jump onto a possible global bandwagon for this potentially exciting planetary exploration.

Indian Space Research Organisation Chairman G Madhavan Nair said the United States and Europe appear to favour a global partnership in this context, and India would be more than willing to be a partner in this huge exercise…

“For mankind, the next interesting thing (after moon) is Mars,” Nair told PTI in Bangalore.

“To reach there and make an investigation is a big challenge. After the moon, Mars could be logical step,” he said…

“It’s not a question of shying away. Whether we need it (manned mission to moon) immediately or not; that debate is going on. Opinion is truly divided. Some people believe the instruments themselves are more than adequate. Robots can do the job and so on. A few others believe it (manned mission) is a national pride and we should do it. We are also subjecting this for an internal review as well as in various professional bodies. Maybe in the course of a year, we will have better clarity on that (whether or not India should go for a manned mission),” he said. [Link]

Meanwhile, as in all other aspects, China is zooming on. I predict right now that if the Chinese put a human on the Moon before we send one back there, it will shake the core of America’s faith in its dominance, every bit as much as Sputnik did. U.S. leaders must not allow that to happen.

Internal NASA memos are reportedly calling for a much earlier return to the moon than had previously been mentioned by President Bush in speeches he made in 2004. The plan, called “Lunar Sooner,” would have NASA scale back space shuttle launches and put the savings towards the development of a new space vehicle capable of a manned mission to the moon as soon as 2017…

Still, it could cost many tens of billions for the moon program. China and Russia have both recently announced plans to send their astronauts to the moon as early as nine years from now, mimicking what the U.S. and astronauts Neil Armstrong and Buzz Aldrin did almost 37 years ago. [Link]

See related posts: India backs off of Moon ambitions, Western scientists hop aboard Indian Moon mission,Will the U.S. participate in an Indian Moon mission?, Desibots on the Moon, An heir for Rakesh Sharma, How can a flag “blow” on the Moon?, Mars comes to India, Space and Politics, “…is worth the risk of life”, Shah Rukh Khan as NASA Astronaut??