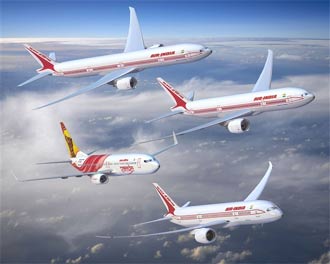 Yesterday I brought you the story of the competition between airlines in India to have the hottest stewardesses. Today, a blockbuster deal was announced that will put even more attractive, svelte bodies in the Indian sky. Well…at least they are more attractive to this Aerospace Engineer

At a signing ceremony held today at Air India’s headquarters, Boeing [NYSE: BA] Commercial Airplanes President and CEO Alan Mulally and Air India Chairman and Managing Director V. Thulasidas formally announced an order agreement for 68 airplanes. The order, placed with Boeing in December 2005, is valued at more than $11 billion at list prices and deliveries are scheduled to begin in November 2006.

Here is the sugar in the coffee:

‘Boeing has a counter-trade… amounting to (1.9 bln usd) over the next 10 years, which would mean that Boeing will buy from India a range of goods and services,‘ Patel said.

The aircraft maker will also spend 75 mln usd on training pilots and another 100 mln in maintenance and repairs to the aircraft, he said. [Link]

So basically Boeing gets a huge contract from India, and in return outsources some of its production line there, which will result in a very positive economic impact. I hope some of you purchased Boeing stock before the closing bell. PRI’s Marketplace has a nice audio summary of the specifics.