Last month the BBC had an article about the stern warning issued by Air India to its cabin crews: 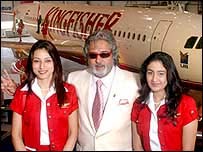 India’s state-owned airline Air India has threatened to ground its overweight cabin crew unless they shed their excess pounds over the next two months.

Some 10% of its 1,600-strong cabin crew are estimated to be overweight or suffering from obesity.

“We have a tolerance limit that cannot be exceeded,” he said.

Although the Air India Cabin Crew Association welcomed this decision, they didn’t say anything about the fact that the “tolerance limits” were different for men and women. Quite simply the airline wants hot stewardesses in order to compete in the always cut-throat airline business (see the Kingfisher Airlines picture on the right). Want more proof? Check out the BBC’s most recent report (quite humorous) from freezing cold Delhi:

Delhi can be mercilessly chilly during the opening weeks of January.

So imagine my surprise the other afternoon at finding my favourite outdoor swimming pool absolutely teeming with glamorous young people, in what looked, from a distance at least, like a cross between spring break in Cancun and a Mumbai movie premier.

Now for those of you who have watched the Discovery Channel specials about NAVY SEAL training, tell me if any of this sounds familiar:

As I got closer, the poolside revellers seemed to be undertaking some kind of bizarre initiation ceremony.

A joyless woman wearing dark sunglasses and even darker lipstick was instructing them to leap into the deep end, swim half a length and then return to the side of the pool.

Those that completed this brief aquatic adventure were labelled “eligible.”

Those who floundered were cast out as “rejects.”

After further investigation, all was revealed.

Far from being a poolside party, this was actually the preliminary stage of a job interview. [Link]

This was actually a job interview for Virgin Atlantic Airlines. Rest assured that in addition to having svelte bodies, their stewardesses are trained in underwater demolitions. A few months back NPR did a nice story about the infancy of aviation in America, when apparently having hot stewardesses was part of the joy of flying. It was a very educational story I thought, especially when comparing to air travel today.

Even on a biting winter afternoon, there was no shortage of volunteers willing to go half-a-length for a bulging pay packet like that – taking the plunge, in the most literal sense of all.

32 thoughts on “Q: What is more difficult than NAVY SEAL training?”